The rise of Bitcoin (BTC) past the $8,400 USD key resistance level has blinded the success of a number of well-performing cryptocurrencies as the altcoin market remains anticipatory of a possible bullish momentum in the coming week. Chainlink (LINK), a cryptocurrency smart contract that allows users to use external data feed and oracles, has grown over 29% over the past week to change hands at an intra-week high of $2.381 against the dollar.

"This price action continues five straight days of growth, during which #Chainlink has improved by a total of 32.7%, making Chainlink one of the best performers as of late—narrowly edging out the 30.2% achieved by Monero ( $XMR )."$LINKhttps://t.co/O198SdYvra

Chainlink rises 29% in a week as blockchain integrates 2keys

LINK currently changes hands at $2.171 USD on the market representing a slight 4% increase since the early Asian trading hours. The coin holds on to the 16th position on Coinmarketcap charts with a total market capitalization of $765 million USD.

The spike in price comes in light of a partnership with 2key, a second layer solution that integrates smart links on the Chainlink platform to disburse rewards on contributing oracles on the blockchain.

Our #SmartLinks are the integration of #SmartContracts into regular #Web-Links, but you don't need to own #crypto to use #2keyNetwork as a #BusinessOwner or #Referrer.

You can use your credit card, as usual, thanks to our cooperation with @SimplexCC.https://t.co/iVTP4qpwPC

The magnanimous growth in LINK’s price has since slowed down reversing to the $2.180 USD region as the market bulls aim to keep the price above the psychological $2.00 USD level.

The sharp rise in LINK/USD tested the SMA 100 line for the first time since early December as bulls went all out at the start of the trading session. However, the retracement to current $2.171 USD level shortly after breaching the resistance provided by the SMA line, signals exhaustion by bulls in the market. 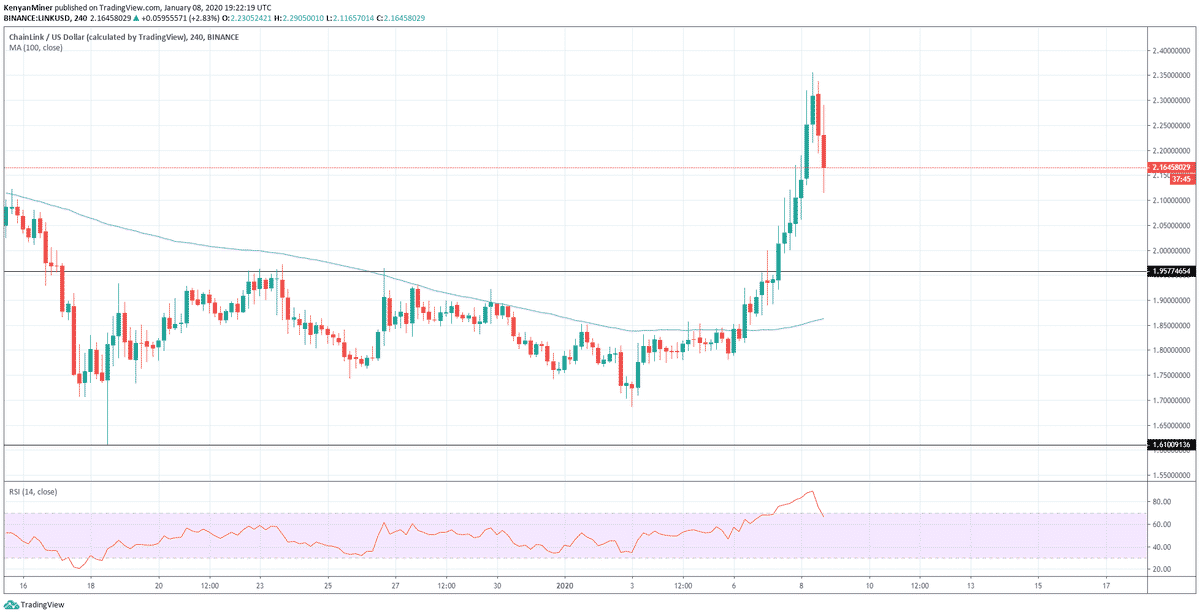 The 20-day relative strength index (RSI) currently oscillates at 61 with a bearish trajectory signaling a possible bearish reversal in the coming days.  The lower time frames shows a bleeding market as price failed to breach key resistance at $2.40 USD on the 4-hour charts. The 4-hour RSI is spiking downwards signaling a possible further push lower in the coming weeks.