Bitcoin price action has been mundane mainly because it was not been able to overcome the seller congestions at $12,000. There was a brief recovery over the weekend supported by the support established at the 61.8% Fibonacci retracement level taken between the last swing high of $12,084 to a swing low of $11,120. While the momentum stepped above $11,900, Bitcoin traded a weekend high of $11,945 before embarking on the ongoing retreat.

At the time of writing, Bitcoin is trading at $11,819. The hunt for higher support as begun, preferably $11,800. The Relative Strength Index (RSI) is also in the middle of a retreat from the weekend high at 57. If the movement under the midline continues and the RSI draws nearer to 30 (oversold), we can expect BTC/USD to extend the bearish leg under $11,800.

However, consolidation is also likely to take place, especially with the MACD clinging to the midline (0.00). A sideways trading price action would be welcomed by the bulls because it gives them ample time to secure formidable support areas while concentrating on the next rally towards above $12,000.

According to Plan B, a pseudonymous analyst the stock-to-flow (S2F) model shows that Bitcoin is still in a bullish phase and that the next target from the current price action is 2017 all-time high close to $20,000. For now, all the attention is channeled towards establishing a formidable higher support area and overcoming the hurdle at $12,000. 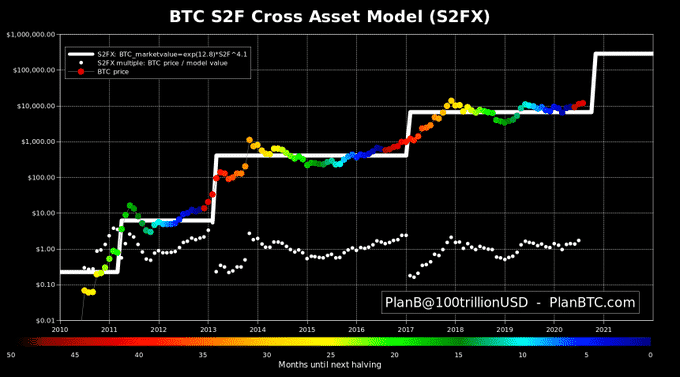