The last 24 hours have been particularly encouraging as BTC and other major cryptocurrencies slowly recover from their respective previous price deep. Bitcoin (BTC) had recently experienced a price drop of around 14% breaking a major support level at $8,500. This instigated a major market swing as many altcoins, including Ethereum (ETH) and Ripple (XRP) all moved correspondingly to a price reduction. However, over the last 24hours, the crypto market slowly recovered its losses and major cryptocurrencies are now rising up the charts.

BTC price was majorly determined by Bakkt’s inbound monthly settlement and the recent news of China moving to adopt the blockchain at economical levels. BTC was seen to be trading below the $7500 level as at 24 hours ago. Falling as low as $7,450 area, bitcoin only started resurrecting within the last 24 hours in which price has moved up more than 12%. 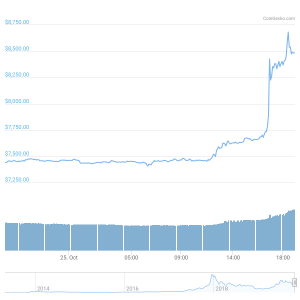 At the time of writing this piece, BTC is changing hands at $8,376. Within the last 24 hours, BTC was seen vacillating between $7,600 and the $8,400 area to build strong support within the range.

Ethereum began the week on a very bad note. Moving down more than 15%, ETH lost more than $20, touching a low of $160 as at Thursday

However, the charts began to move in the opposite direction following the recent market reverse that was seen in BTC within the past 24 hours. As ETH slowly recovers its accumulated losses, it moved up the charts by 10% in the last 24 hours to record its current price of $179. 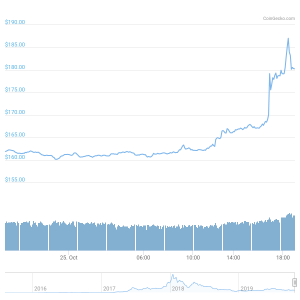 Ripple, like major altcoins, also dropped considerably in price in previous days. Ripple (XRP) struggled on the charts in recent days as the general crypto market fell into great dips. As the market began to recover, ripple, however, remained silent and traded sideways instead, perambulating around the $0.29 region for several days. 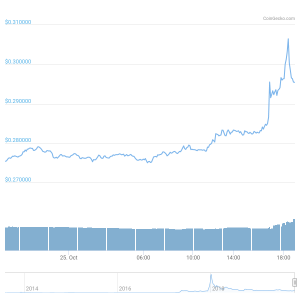 Ripple gained around 6% within the last day, landing at $0.293 per unit of the coin at which its currently changing hands.

✓ Share:
Disclaimer
The presented content may include the personal opinion of the author and is subject to market condition. Do your market research before investing in cryptocurrencies. The author or the publication does not hold any responsibility for your personal financial loss.
About Author
Dare Shonubi
Staff writer at Coingape. Certified cryptocurrency expert and Blockchain journalist covering crypto market analysis and general Blockchain adoption and development. You can follow me on Twitter at @ShonubiDare or reach out to me at dare[at]coingape.com
Twitter LinkedIn