A recent poll shows that around 25% of the participants think that the Coronavirus will have a minimum impact on Bitcoin. This is despite the epidemic being hailed as the key trigger that saw Bitcoin gain over 30% in January. The 25% who think that the Coronavirus will now and in the near future not going to affect Bitcoin are thus far being proven right. Recent heightened fears over a global recession and tanking markets, Bitcoin, a safe haven asset has not been reacting.

Is Bitcoin A Safe Haven?

The U.S stock market spent Monday in red. In fact, as MSN reports, big tech stocks lost more than $200 billion in that single day. During this time, Gold soared. In recent days, the asset has reached a 7 year high. But what about Bitcoin?

Well, although we have seen Bitcoin soar when the stock market is tanking. This time has been different. Bitcoin is also in red. At the time of writing this, testing the $9,500 support.

On top of the market failure, there is an increased fear that a recession is imminent. In Asia, China, Japan, and India’s development have halted. All these countries were having economic worries and weaknesses coming into 2020 and now with the spread of the Coronavirus, growth is almost reaching a standstill. 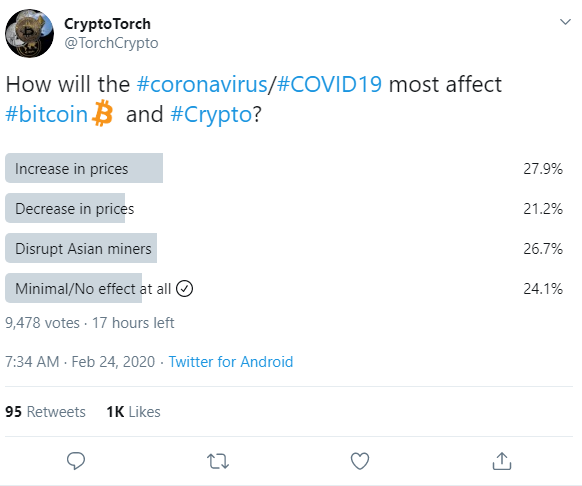 Europe, on the other hand, is feeling the effect through Britain and Germany. Britain recently exited the EU which has huge economic significance. Germany is also at risk with its factories. Fear of the Coronavirus has seen the demand for goods drop, slowing the country’s production.

The US on its part is headed for an election in a few months. But even before this, there is concern that there are more and more confirmed cases of the Coronavirus in the country. And let’s not forget the trade war with China which is yet to be sealed.

Clearly, this is a time for Bitcoin to rise. But it is not. So is it a safe haven? Twenty-five percent of around 9.500 people think Bitcoin’s price will be minimally affected by the Coronavirus. This is to say that it is not a safe haven.

1) With global equities taking a bloodbath, $BTC did not act as a safe-haven today but was correlated risk-off: a 500point range and spot currently ~4% lower (24hours).
Unlike the VIX which rallied from 17% IV to 25% IV, BTC IV, already a high vol product, remained unmoved.

Nearly 30%, however, think that it will see prices increase. Another 21% think prices will decrease and 26% think it will interrupt mining operations in Asia.

For now, investors have their eyes locked on the $9,500 support hoping it will hold. Maybe if it bounces off this position it can finally launch and react as those who believe it as a safe haven have been expecting.