Its been a week since Bitcoin Cash forked into Bitcoin Cash ABC and Bitcoin Cash SV but the hash war is still one as there is still no clear winner. Initially, Bitcoin Cash ABC had raced ahead but Bitcoin SV soon caught up and now the battle is neck to neck. While this “Battle Royale” is taking place on the sidelines now several analysts feel that this could be a contributing factor to the recent volatility and the meltdown that has gripped the markets. This image from hashwar.live gives us a pretty simple visual of the neck and neck battle. On the top, we can see the number of blocks that have been mined by each camp and on the bottom, we can see the percentage of hash power that each one is currently utilizing. 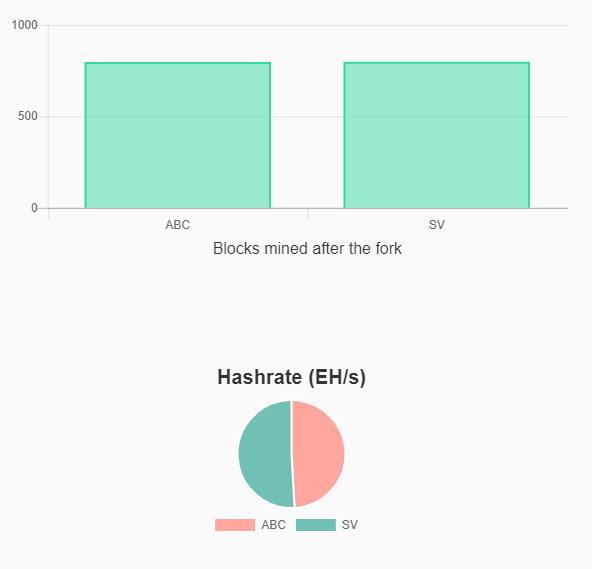 This continuing hash war has still kept everyone concerned on the street as there could be a possibility that one of the above forks started siphoning off some of the hash power from the original Bitcoin (BTC). The possibilities of this happening stand a little low as it would be very costly for any miner to switch over but that doesn’t mean that some won’t try. The data collected from CoinWarz reveals that there has been a slight dip in hash power for BTC after the fork, but its still far away from being considered as alarming. In fact, the rising hashrate for BTC in 2018 has built up enough buffer that even if it were to drop an additional 50% probably wouldn’t hurt bitcoin transaction times all that much and certainly wouldn’t affect the stability of the network.

The market is still in a bearish mood as everyone is still searching for levels from which the BTC can rebind. While all this is playing out, good news and a couple of bad news have hit the market simultaneously. Starting with Bad News, Firstly the Department of Justice has shifted its focus on Tether and its role in criminal probe regarding the involvement of traders in manipulating the prices of Bitcoin last December when it reached the all-time highs. The second bad news that hit the streets was of the slight delay in the much-awaited launch of the Bakkt service.

Moving of some good news which could bring cheer to the markets and crypto sentiments. The first of its kind crypto ETP is all ready to begin trading on SIX exchange in Switzerland. This product could bring in some institutional money into cryptos which the market need desperately to change the sentiment