Margin trading has been the game of professional traders for a long time inequities and is recently been getting a lot of traction in the crypto industry as well.  To capture this growing industry trend, Binance announced its entry into the margin trading game and launched its new platform terming it as version 2.0

Binance to provide 3x leverage to its users

This week, Binance added another diamond to its crown as the exchange launched version 2.0 of its platform – a move that officially brings margin trading to its customers. The exchange had indicated the same May and said that the service would feature up to 20x leverage soon after. But the actual announcement by Binance this week surprised everyone as Binance indicated that leverage (the amount that can be borrowed against a user’s crypto collateral) is just 3x

Quoting from the official trading guide launched, the exchange said “Your Margin Wallet balance determines the number of funds you can borrow, following a fixed rate of 3:1 (3x). So if you have 1 BTC, you can borrow 2 more,”

“This is another step in providing an inclusive cryptocurrency trading platform catering to the needs of both advanced institutional traders and retail traders under the same roof,”

According to the information available, it is learned that there are currently six supported cryptocurrencies – Bitcoin (BTC), ether (ETH), XRP, Binance coin (BNB), Tron (TRX), and Tether (USDT), with several pairs.

The exchange also announced a table that gives borrowing limits and Daily Interest Rate for each coin.

The dashboard of margin trading also gives the risk appetite of the borrowed assets. The chart gives the trader a risk level according to the borrowed funds (Total Debt) and to the funds held as collateral on the trader’s margin account (Account Equity).

The risk level changes according to the market movements, so if the prices move against the trader’s prediction, his assets can be liquidated. If the margin level drops to 1.3, the trader will receive a Margin Call, which is a reminder that he should increase his collateral (by depositing more funds) or reduce his loan (by repaying what he has borrowed). If the margin level drops to 1.1, the trader’s assets will be automatically liquidated, meaning that Binance will sell the funds at market price to repay the loan. 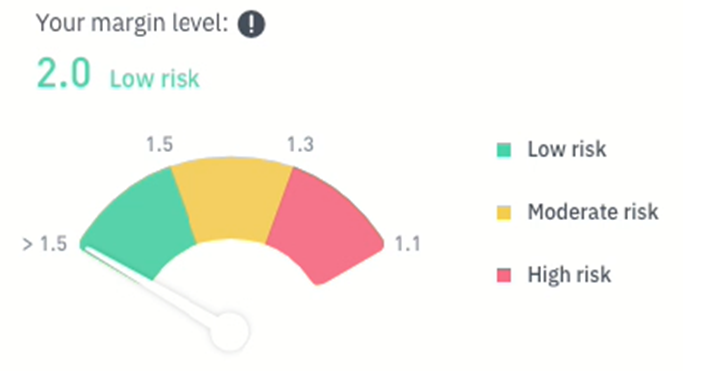 The official announcement also cautions the users about the risk associated with margin trading as it is risky and hence Binance has launched various guides and reference material on Binance Academy to explain and educate the users.

Margin trading is definitely a great step for Binance and it will bring more professional traders to the exchange. Being a new function, leverage can be set up to 3x at this time which is anticipated to rise over time.  It will be very interesting to see how this plays out.