An official blog released by Binance exchange confirms the launch of Margin trading service. However, earlier on May 24, 2019, Binance tweeted two screenshots, seeking user’s suggestion on which layout would they be preferred, a white background one and the black background.

It was first noticed on Binance’s Twitter handle when a tweet was posted with two different colors included with the tab of Margin. Nonetheless, it was to create the buzz of its upcoming feature but according to TechCrunch, it has already been tested among a few users. As the testing has already been undergone, it is worth to predict that the margin trading option will go live anytime soon. 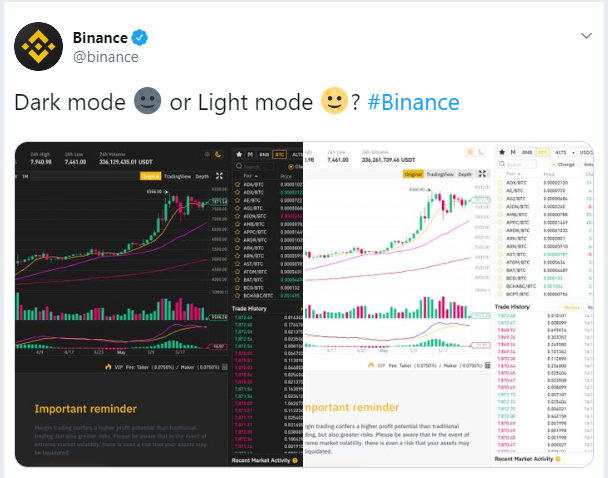 By usage, Margin trading is an option that enables traders to boost up their buying power by using their balances as collateral. However, it wasn’t available at Binance exchange even the binance itself as the largest exchange as well as  the margin trading option carries potential profit margin. It is the first of its kind of Binance to launch margin trading service whereas the other trading platforms including BitMex, Huobi Pro, Poloniex, Coinbaes’s GDAX and Kraken are already serving this service to their customers.

At the moment, Binance is the second largest cryptocurrency exchange in terms of adjusted volume of the last 24 hours. It presently counts the volume of $2,088,850,554. Nonetheless, its native token, Binance Coin (BNB) is soaring a new peak of $33.87 against US Dollar. According to data provided by Coinmarketcap (CMC), BNB is surging with 6.42 percent over the past 24 hours and presently valuing the average trading volume of $4,781,168,385.

What’s your take on BNB’s soaring value.? Do you think it will jump higher citing margin trading option by Binance exchange.? Let us know in the comment below