2020 has been set as the date for the next financial crisis by the economist and experts alike that will break down everything as JPMorgan chase details the crashing we will be seeing. What role Bitcoin and cryptocurrencies will play here?

The world is sleepwalking into a future crisis

Everyone is talking about the impending financial Crisis. Now, economists and experts are putting down the year it is going to strike the world down.

“…by 2020, the conditions will be ripe for a financial crisis, followed by a global recession.”

Talking about the reasons for the same, he points out unsustainable policies, inflation, trade disputes, frothy global equity markets, and slower growth among other factors signing the death warrant of the global market.

Not long ago, former UK Prime Minister, Gordon Brown stated, “We are in danger of sleepwalking into a future crisis.”

“The cooperation that was seen in 2008 would not be possible in a post-2018 crisis both in terms of central banks and governments working together. We would have a blame-sharing exercise rather than solving the problem.”

Everything will come crashing down: 2020 is gonna be worse than 2008 crisis

Now, JPMorgan Chase & Co. has stated 2020 the year of the recession which will see the slide of 20% in US Stock. The report further notes U.S. corporate-bond yield premiums will jump 1.15% points, 48% slide in emerging-market stocks, 2.79% point widening in spreads on emerging-nation government debt and much more. Also, emerging currencies will see a drop of 14.4 percent.

They further note the potential for a “Great Liquidity Crisis” future while stating,

“The shift from active to passive asset management, and specifically the decline of active value investors, reduces the ability of the market to prevent and recover from large drawdowns.”

Apparently, the longer a recession lasts the bigger the hit to the markets as the report states:

“The recession’s duration is a powerful drag on returns, which should dovetail with some readers’ concerns that policymakers lack the necessary monetary and fiscal space to extract economies from the next recession.”

Where does Bitcoin stand?

A few days back, IMF had a poll on Twitter asking if the world is better prepared after the 2008 crisis, concluding to a No.

It’s been 10 years since the start of the global financial crisis. With the lessons learned since then, do you think the world is better prepared now?

Bitcoin got its first mention just about two months after US investment bank Lehman Brothers filed for its bankruptcy. Now, after 10 years through various ups and downs, Bitcoin is still here, expanding its reach and adoption.

Though at one side the liquidity crisis can force people to cash out their investments which can be expected to happen in case of Bitcoin as well, experts and crypto enthusiasts are positive and hopeful of Bitcoin to be the saviour during this crash.

During the crashes, silver and gold become the preferred hedge against the crisis. But this time people have another option i.e. digital assets. Bitcoin is increasingly seen as the lucrative alternate option, especially to the millennials.

Moreover, as people lose faith in one currency, they tend to leave the sinking ship and jump onto the other one that just might be the case for Bitcoin as well.

In the past few months, institutions have come out in the open and made their crypto-related plans known. From Morgan Stanley, Merrill Lynch, Goldman Sachs to JP Morgan, Fidelity Investments, Blackrock and so many more, institutions are making headway into the crypto market.

As Tweeted by Kim Dotcom, who previously also shared how gold and cryptos make the sense in the coming crash, again insisted: 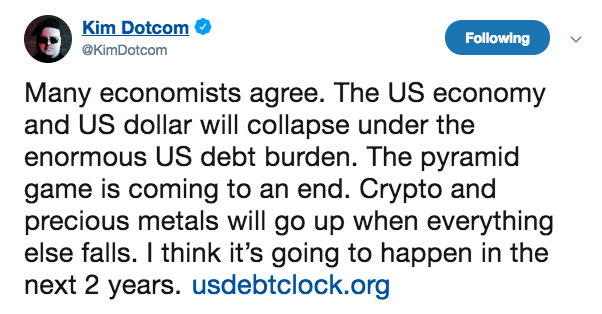 Unpopular opinion: Institutions will come under pressure in next 5 years if they have 0% exposure to Bitcoin & digital assets. As fiduciaries, they need to invest capital in the best risk-adjusted opportunities.

Bitcoin and cryptocurrencies have surely got a chance against the financial crisis. Now, only the time will tell how hard we will be hit and what role Bitcoin will play in this.

Do you think Bitcoin and other cryptos will be seen as an alternative option during the coming financial crisis or will it crash along with other markets?