While every cryptocurrency enthusiast would want countries to give up their struggling fiats and take up bitcoin as their base currency, well it’s not actually happening that way. A recent research, released by Dior research states that only, Argentina and Venezuela are doing so among the countries struggling with their Fiats.

Economic Story of Venezuela and Argentina

Inflation in Venezuela surpassed 50% per month for the first time in November 2016, officially categorizing the country as hyperinflationary thanks to its political and economic mismanagement. This mismanagement has led the country, to default from more than $50bn of government bonds.

There are fears that the annual inflation in Venezuela is now approximated to be 200,000%, while the International Monetary Fund (IMF) projected it might spike to 1,000,000% by end-2018 – similar to events that transpired in Germany during the 1920’s and Zimbabwe in the 2000’s.

In late August, Nicolás Maduro, Venezuela’s President, launched a new currency with the promised backing of oil supplies called the Petro, despite its non-existence in public hands. Caracas took to starting a new currency recently, which just three weeks in already has seen an inflation rate of 100%.

Similarly, in Argentina, the inflation rate spiked most significantly from September 2015 to March 2016 when it grew from 13% to more than 40% during which time the volumes stayed relatively stable. The more recent inflation hike has been underway since June 2017 with inflation rates now approaching 35%.

Both these South American countries have seen superlative growth in people adopting bitcoins over their Fiats and cryptocurrencies have steadily grown as awareness of the asset class. 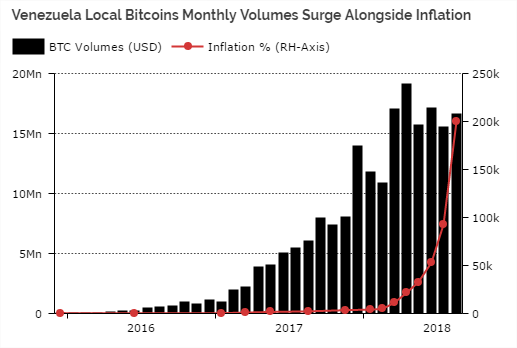 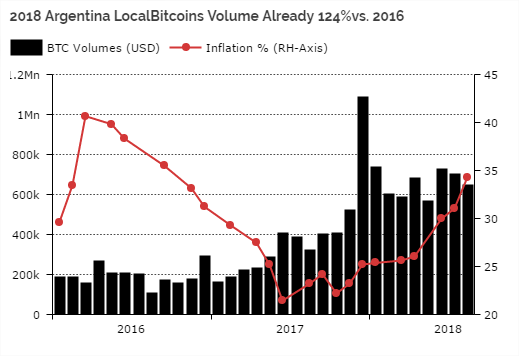 Turkey, another country that is facing economic turbulence, has also been battling increasing inflation for the past two years. Inflation has increased from 6% in April 2016 to nearly 18% today. In August when the Turkish lira slumped to a record low, volumes on the country’s largest exchanges grew by 112 %, there was a short burst of interest in cryptocurrencies but as situation marginally improved, Bitcoin volumes continued to slide.

Egypt’s inflation rate grew from 9% in February 2016 all the way to 33% in July 2017. Throughout this time, the LocalBitcoins volumes remained insignificant. The largest growth in volumes happened from June 2017 to December 2017 when they grew from $147 to $43,000. Egypt’s Financial Supervisory Authority (EFSA) said in December that Bitcoin trading is illegal in the country. Egypt’s primary Islamic legislator said in January that bitcoin is prohibited under Islamic law. The volumes have since been in the downtrend. 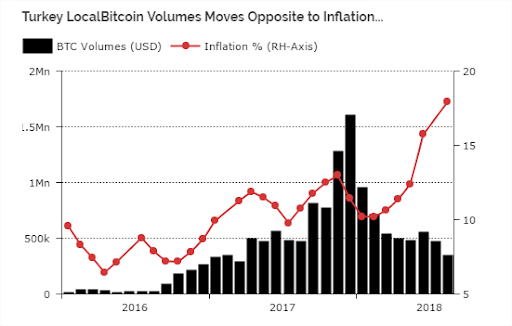 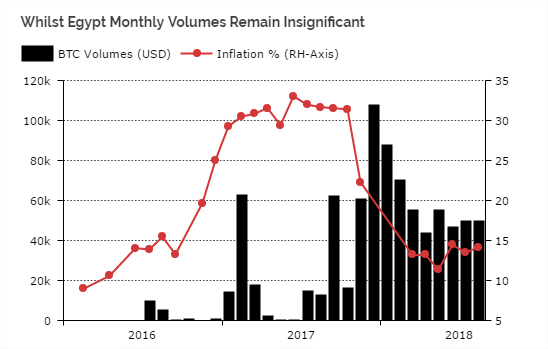 These figures show, that despite weakening Fiats the people show reluctance in accepting cryptocurrencies yet. Although the report touches mildly on the outright bans on bitcoin in Iran and Egypt, Larry Cermak who is the Head Analyst at Dior Research shares a few more insights on Twitter.

9/ Turkey has also been battling increasing inflation for the past two years. Inflation increased from 6% in April 2016 to nearly 18% today. However, despite the short bursts of interest, LocalBitcoins volumes have continued to slide. Perhaps because trading is legal in Turkey. pic.twitter.com/VvRJHJwjeC

11/ Egypt’s financial regulator said in December that Bitcoin trading is illegal in the country. Egypt’s Islamic legislator said that bitcoin is prohibited under Islamic law.

13/ Backlash fears from authoritarian states, notoriously known from weak currencies, might pose a challenge to the onboarding of new adopters.

Well, one knew adoption of Bitcoin over Fiats was a challenge, but even in countries where Fiats are failing people are still skeptical about using cryptocurrencies. This shows the importance of regulations if cryptocurrencies have to become mainstream otherwise people will always be fearful of landing into trouble.

Will the adoption of Bitcoin slowly pick up or people would continue to trust falling Fiats.? Do let us know your views on the same.