BCH/USD recently approached the critical resistance at $360 amid the broad-based cryptocurrency rally in April. With the price above the 100 simple moving average (SMA) 4-hour, the bulls increased their entries and positions. However, on failing to break past $360, the price retraced below $300 before finding support at the 50% Fib retracement level between the last swing high of $355.31 and a low of $165.83 close to $260.57. The support congestion at this level saw BCH bounce back above $360.

Another downside correction slashed the gains sending the digital asset below $300 level again. This time the price dropped below the 100 SMA but the 61.8% Fib level functioned as support during the last weekend trading sessions. Bitcoin Cash later took advantage of the surging Bitcoin (BTC) price on Tuesday to push for a correction to weekly highs around $312.35.

At press time, BCH/USD has witnessed another retreat to the current price at $286.93 under the 100 SMA. Moreover, the crypto continues to grind closer to a contracting triangle that is approaching a breakout. The ongoing bearish momentum risks sending BCH under the triangle support; a move that could result in a further breakdown that is likely to test $260 support and even refresh the lows close to $240.

On the upside, trading above the triangle resistance will mark the beginning of another bull rally. Bitcoin buyers have their eyes on $360 (critical resistance) but $400 is within reach in the medium-term.

Technical analysis shows the Bitcoin price leaning towards the bearish momentum in the short-term. The RSI at 38.61 is moving south towards the oversold while the MACD has crossed into the negative zone. However, the indicator is ranging just below the mean line (0.0) in turn hinting that Bitcoin Cash will trend sideways in the coming sessions.

MACD 4-hour: Slides into the negative zone but maintains a ranging trend. 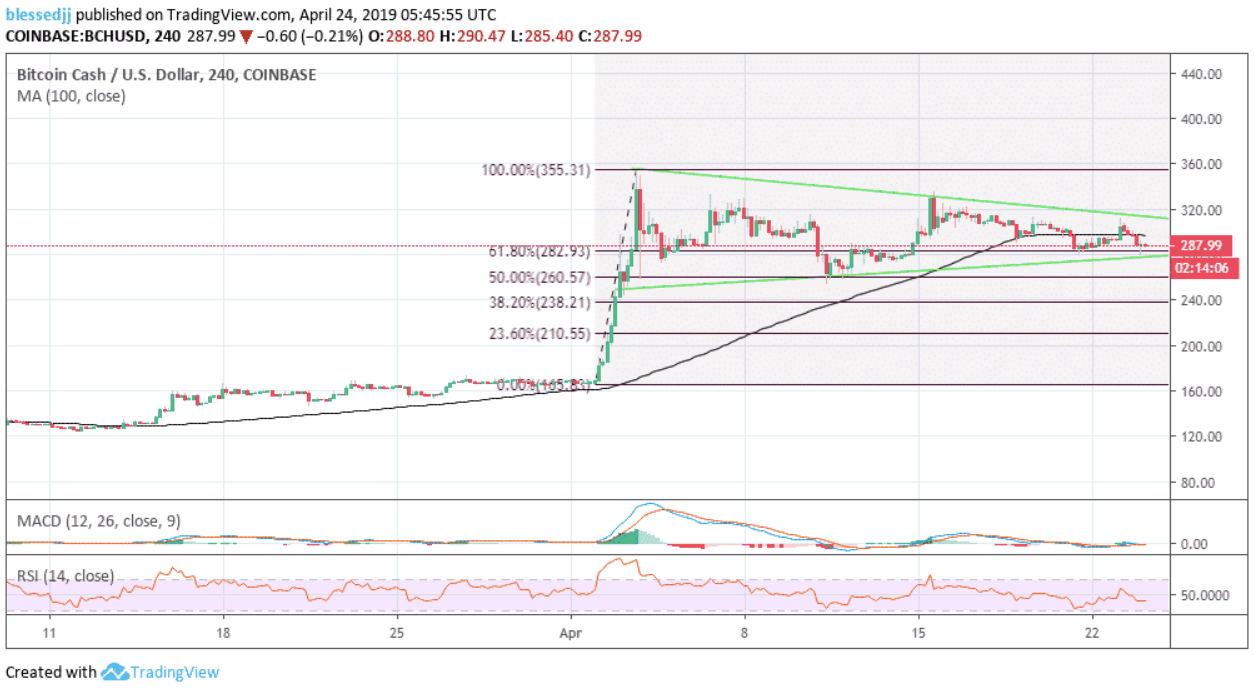