Bitcoin Cash and the rest of the major cryptocurrencies have had a radioactive 2019. While recovery from the month of April to the end of June was exceptional, the past couple of months have had to deal with heightened volatility. In other words, it has been a rollercoaster ride.

Investment in cryptocurrencies remains a complex idea understood by a handful of people around the world. Lack of proper information and guidance makes it difficult for investors to engage in the market without losing their money in totality or staying in the same ‘shitty’ position longer than expected.

There are hundreds of cryptocurrencies listed on CoinMarketCap, however, not all these coins and tokens are prime for investment. For this reason, this article will dive into the nitty-gritty of Bitcoin Cash and demystify the force behind its growth and of course, what is holding it back.

What is Bitcoin Cash?

It is important to note that this top five cryptocurrency is a hard fork of the Bitcoin (BTC). Bitcoin Cash was birthed on August 1, 2017, after hard forking Bitcoin code. In other words, a hard fork is a process of getting a new coin from an original blockchain, in this case, Bitcoin Cash. Nonetheless, the new blockchain always has modifications that make it different from the parent blockchain.

The creation of BCH was necessary for overcoming a couple of challenges within Bitcoin. The first being scalability; increase in the number of transactions per block. The second, to bring down the cost of transactions. For instance, Bitcoin requires an average fee of $1.31 to process a transaction while Bitcoin Cash only requires about $0.125.

The original Bitcoin Cash blockchain (a fork of Bitcoin (BTC) blockchain) underwent a split in November 2018. This led to the creation of a new cryptocurrency; Bitcoin Satoshi Vision or Bitcoin SV (BSV). The split came following disagreements in the community regarding a scheduled upgrade on Bitcoin Cash network referred to as Canonical Transaction Ordering (CTOR) and OP_CHECKDATASIG.

A section of the community led by the controversial Craig Wright and Calvin Ayre vehemently opposed the updates as they went against the original vision of Bitcoin. Their efforts led to the split of the network with a new coin, Bitcoin SV boasting of a 128 MB block size.

Several months after the dramatic split, Bitcoin SV is trading at $132.17. It has a market capitalization of $2.3 billion and holds the ninth position on the market.

Bitcoin has a mission to become a usable cryptocurrency across the globe. The main goal of the roadmap is to “enable Bitcoin Cash to scale from ~100 Tx/s to over 5,000,000 Tx/s.” Also, developers are working to achieve instant and reliable transactions for better user experience. Moreover, an extensive protocol makes improvements in the future less disruptive and forms a strong foundation for businesses to build on.

However, the performance in 2018 was not so rosy. There were massive paralyzing declines across the board with Bitcoin Cash hitting a low around $75 in the wake of the November 2018 hard fork.

The crypto market is very volatile, changes occur unexpectedly. However, we will try our best to come up with an accurate prediction. However, these predictions should not be used as investment advice. It is recommended to seek the services of a financial expert.

Bitcoin Cash price is currently struggling to hold above $300. However, with the increasing adoption and development of the network, BCH has immense potential to correct to higher levels toward the end of 2019. It is very probable to see Bitcoin Cash close the year above $800. The ongoing developments aimed at improving network stability and making the platform business-friendly could give the coin a boost throughout 2020 with an end year prediction between $800 and $1,200.

He is an all-time supporter of Bitcoin Cash often referred to as Bitcoin Jesus. Although this is not a direct price prediction of Bitcoin Cash, his sentiments towards the crypto’s future are positive. In an interview not so long ago Ver said: “I am very bullish on Bitcoin Cash, just like I was when I was the very first investor of Bitcoin in 2011.” He predicted that Bitcoin Cash will trade at a value two times the current market value by the end of 2019. He remains positive about Bitcoin Cash because it is easy to spend and store as normal cash.

This is a website that shares cryptocurrency predictions regularly. Finder.com in their latest Bitcoin Cash prediction says that the project will face stiff competition from other coins like Bitcoin, Litecoin and Dash. The publication adds that “Bitcoin Cash is a very interesting project and, as one of the world’s highest-market-cap digital currencies, clearly one that many crypto enthusiasts are watching with interest. If it can achieve widespread adoption not only among the cryptocurrency community but also in mainstream society, there may be potential for growth, and it does offer a few key points of difference when compared to bitcoin.”

Wallet Investors’ prediction for Bitcoin Cash price is bearish. They predict a -47.724% drop from the current market value to around $149. Below is the chart trendline for Bitcoin Cash:

A leading cryptocurrency exchange aggregator that provides a gateway to more than 300 coins and 45,000 trading pairs also releases regular predictions for cryptocurrency prices. The platform believes Bitcoin Cash will have a rigorous development phase in the next five years. CoinSwitch says that BCH future will continue in tandem with that of Bitcoin (BTC) because the two coins have a lot in common. As for the prediction, “2019 will see sunshine throughout, mostly. Just in the second quarter, BCH might see a marginal increase, after which it will leap across and reach as high as USD 2K level.”

The performance of Bitcoin Cash in the next five years will depend on the developments within the network, technology advancement and mainstream adoption. The plan to make Bitcoin Cash into a smart contract supporting platform like Ethereum could pave the way for more adoption and use in businesses. Moreover, the expected Bitcoin rally after the mining reward halving in May 2020 is likely to propel BCH to greater heights. Therefore, there will be significant growth in the price of Bitcoin Cash hitting levels above $5,000 by the year 2024.

Bitcoin Cash as an Investment

When we take this article into account, it is difficult to ignore Bitcoin Cash. The crypto being a fork of Bitcoin means that it has solid technology and security features. In other words, it is very unlikely that Bitcoin Cash will crash and be wiped out of existence in the future.

The platform is also gearing up for more developments. Its roadmap is clear in terms of increasing scalability and its functions in businesses. As a smart contract platform, Bitcoin Cash will be able to compete directly with Ethereum and other decentralized application (dApp) networks.

Is Bitcoin Cash a Good Investment?

With the above in mind, Bitcoin Cash is a good asset for investment. The short-term could seem bearish but in the long-term BCH will start to grow in value. As long as Bitcoin continues to grow, a ripple effect is expected with the other cryptos especially those in the top ten.

What is the current price of Bitcoin Cash?

What is the current price of Bitcoin Cash?

Will Bitcoin Cash go up again?

Bitcoin Cash is poised for growth in the remain months in 2019. However, investors will have to endure the high volatility currently in the market. The crypto has already demonstrated the capacity to recover even hitting levels above $500. Therefore, there is potential for growth towards the end of 2019 where BCH could hit levels around $800.

Should you buy BCH?

Based on the above predictions, buying Bitcoin Cash for long-term holding would be beneficial. While the short-term is bearish, Bitcoin Cash will eventually pick up momentum. One clear indication is that; BCH will close the year at a higher level than the current market value.

Bitcoin Cash has solid technology and being a fork of Bitcoin (BTC), it gets a lot of strength from the original Bitcoin code. This means that BCH will be around for a long time. Its future is in one way or another tied to that of Bitcoin.

What about BCH speculations?

The volatility in the crypto market is directly linked to the speculative nature of the market. Investors and traders bet on the rise and fall of the prices. Therefore, speculation will continue to be a key factor in Bitcoin Cash future. However, long-term growth remains the factor when it comes to investment in Bitcoin Cash.

Following the devastating 10% drop on Tuesday, Bitcoin opened the Pandora box paving the way for a transition from a bullish trend to a bearish trend. The next target on the downside is $7,200. The daily chart shows dips below the 200 moving average (MA) having been averted or short-lived. At the moment, BTC is exchanging hands around $8,400 on Coinbase. Still defending the $8,000 support is the 200-day MA.

From a short-term perspective, Bitcoin has a bearish bias. The moving average convergence divergence (MACD) displays a strong negative picture. The wide divergence signifies the control the bears have on the price. On a brighter side with reducing volume, the dips are likely to be shallow.

The formation of a falling wedge pattern is a long-term silver lining for Bitcoin investors. A breakout could take a while but its approach could propel Bitcoin above $10,000 and even towards $11,000. 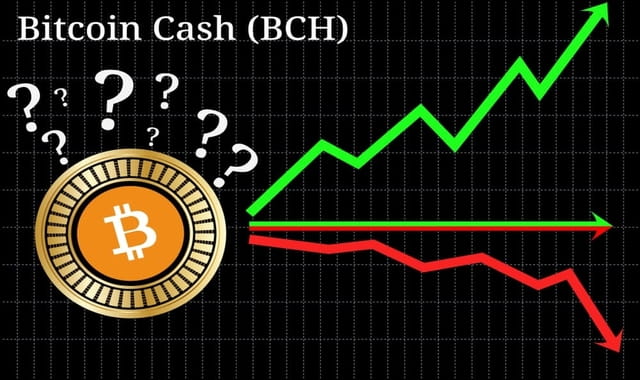 Article Name
Bitcoin Cash (BCH) Price Prediction: Projected Analysis of 2019 & 2020 to 2024
Description
Bitcoin Cash had a ballistic performance in 2017 from an initial price of $310 on August 1 to a high around $3,656 on December 20, 2017. In less than six months, Bitcoin Cash investors saw a growth of more than 1000%.
Author
John Isige
Publisher Name
Coingape
Publisher Logo