Bitcoin drops down to $6,394 while altcoins take a serious plunge causing BTC dominance at year’s highest. Though people are hoping for a reprieve, experts are pointing towards another low which if Bitcoin crosses can accelerate the downward plunge.

The market is in extreme red as cryptocurrencies take a nosedive and fall down in double-digit percentages. At the time of writing, Bitcoin has been exchanging hands at $6,394 with a loss of close to 10 percent in the past 24 hours. Today’s price range has been $6,302 and $6,731.

The entire market cap has lost about $35 billion as it crashes from over $236 billion of yesterday’s highest to $201 billion today. However, as Bitcoin dropped, altcoins took an even deeper fall causing BTC dominance to rise to this year’s highest at 55%. 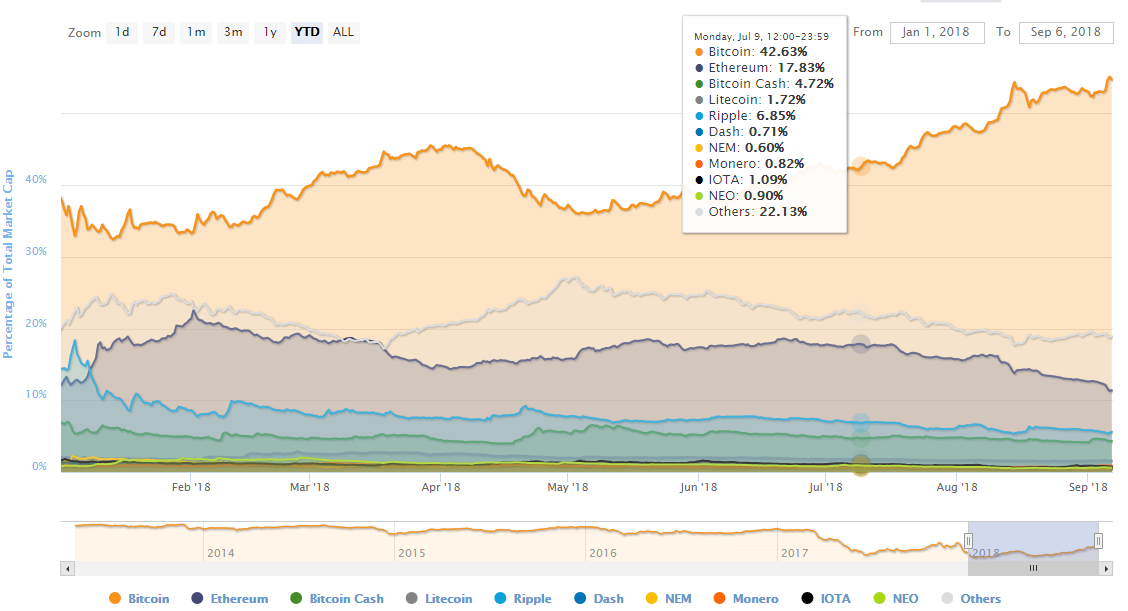 If we take a look at the top cryptos, the ones with the sharpest fall are:

The only coins in the green are:

Also, read: Crypto Market in Free Fall- Is it Fundamental, Technical or Something More Sinister?

Crypto expert and founder and partner at Morgan Creek, Anthony Pompliano shared a tweet regarding the market sentiments:

Want to know why there isn’t a crypto ETF approved yet?

We just saw $100 million of Bitcoin dumped on the market in less than 10 minutes.

It caused more than a 5% decline in BTC price. Some argue volatility, others argue manipulation.

The truth is no one knows.

As crypto market worsens, optimists try to bring out their points as crypto enthusiasts come up with tweets like:

It’s so clear looking at the charts that $BTC is just shaking out the weak hands before it pumps to $12k. #Bitcoin

However, pessimist or realists, rear their ugly heads and believe Bitcoin price is going to drop down further. Bitcoin enthusiasts aren’t feeling at all good about the market right now as Tweets like these emerges:

$BTCUSD day chart,
if all those magic bullwhales won’t react to this, we could see Bitcoin going at 5K levels in the next weeks.

On the positive side, I see a falling wedge, which is a solid reversal pattern.

However, experts are feeling the same as Bloomberg stated Stephen Innes, the head of trading for the Asia Pacific at Onada Corp. said the next key level for Bitcoin is $5,000. If Bitcoin fails to hold this and crosses this threshold, it might end up accelerating the losses.

A bearish trend seems to be in order according to the experts as Mike McGlone, Senior Commodity Strategist at Bloomberg says this is a bearish market and Bitcoin shorts are spiking. He also shared Bitcoin might fall to $5,000.

Whereas Bitcoin longs aren’t seeing much action, shorts keep on going up and up, adding  ₿7,000. Bitcoin shorts are almost to their all-time highest, betting for Bitcoin to go down.

Anthony Grisanti, a guest on CNBC also shared that the short-term market movement is pointing downwards.

Additionally, EU might also make a move towards crypto as Bruegel, Brussels-based think tank prepares a document for EU finance ministers to promote regulation of digital assets and ICOs as reported by Reuters,

“Now the possible expansion of the crypto exchange business in Europe and considerable interest in ICOs in EU countries, which account for 30 percent of the global market in terms of projects funded, is pushing regulators to take a closer look.”

Currently, the market is not looking good at all, with bears strongly positioned. And as experts point out another drop to $5,000, it is a possibility we just might see it but lately, Bitcoin has been going for higher lows, so it’s all wait and watch for now.

Article Name
Bitcoin Plunges to $6,400 while Altcoins Crash, Experts say Red isn’t Over Yet!
Description
Bitcoin drops down to $6,394 while altcoins take a serious plunge causing BTC dominance at year’s highest. Though people are hoping for a reprieve, experts are pointing towards another low which if Bitcoin crosses can accelerate the downward plunge.
Author
ANJALI TYAGI
Publisher Name
COINGAPE
Publisher Logo