According to the latest chart, Bitcoin and Gold share interesting similarities. Experts have been sharing their views on how the Digital gold is similar to Gold and can even replace it as a store of value.

A number of experts have shared their analysis and views about the similarities between Bitcoin (BTC), the digital gold and the Gold. But this time, an interesting chart has been shared that shows an interesting picture.

The Tweet shared by Pladizow with, “BTC vs Gold (Both Log Scale) Uncanny pattern resemblance between Golds 43 years of chart data and Bitcoins 9 years.”

The chart shared that draws the similarities is here: 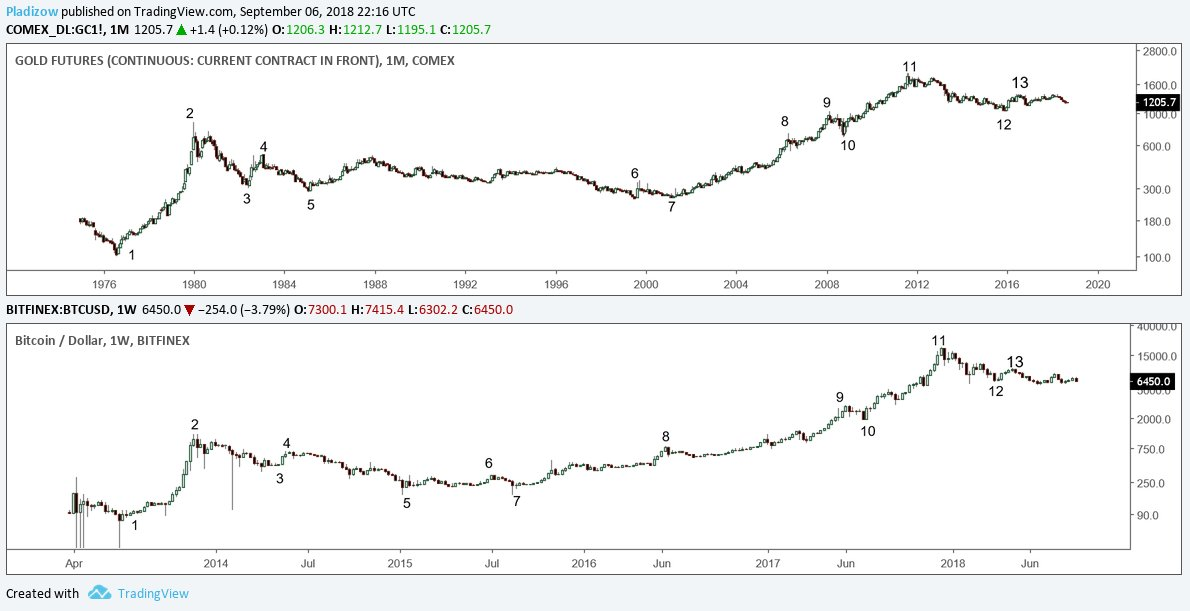 Crypto expert Willy Woo further commented on this with:

Fractal resemblance between BTC and GLD. Maybe digital gold has the same psychology as physical gold. Note the market caps are 2-3 orders of magnitude different so may account for the differing time scales. https://t.co/g7COWSfE78

Previously, numerous experts like Jeff Currie, the global head of commodity research for Goldman Sachs had shared at the end of last year, “the pushback I would have against Bitcoin has to do with its liquidity” and that’s the reason, Bitcoin price skyrocketed.

Lou Kerner, the co-founder of CryptoOracle, actually sees bitcoin better than gold, as he stated:

“Gold has emerged as the global store of value and it has held that position for literally a couple thousand years — that’s an awesome run. So we now we have something (Bitcoin) that we think may be functionally much much better (than gold). So we expect that over time — not in a day, not in a week, not even in 5 years, — for some of the people using gold as a store of value to switch to Bitcoin.”

If Bitcoin becomes as successful as the digital gold, then it can take Bitcoin prices even higher. The similar sentiments have been shared by Gabor Gurbacs, the director of digital asset strategy at VanEck/MVIS as he commented some time back,

“Investors do refer to Bitcoin as a form of digital gold and gold today has around $7 trillion outstanding. If you take, say, 5 to 10 percent — I’ll let everyone do the math — Bitcoin has upside. Bitcoin is used as digital gold today. It’s a de-risk asset. Basically, if someone wants to outlay systematic risk, then one would go to access gold or digital gold.”

According to an institutional investor, John Pfeffer, a partner at UK-based Pfeffer Capital commented:

“Bitcoin is the first viable candidate to replace gold the world has ever seen. So if bitcoin becomes the dominant non-sovereign store of value, it could be the new gold or new reserve currency.”

People are already anticipating and expecting Bitcoin ETF, once approved to take Bitcoin price to sky high as happened with Gold after the introduction of Gold ETF.

Bitcoin is already becoming an option of interest for investors around the world. So, the opportunities for Bitcoin to hit highs are just too many!