At $5,526 Bitcoin is still in the red but as Dollar weakens coupled with historical movement it might see some recovering. USD tumbled on the grounds of slowing economic growth whose bull days have come to an end as per Morgan Stanley.

Crypto analysts are calling out for even more pain ahead and if it stays below $6k level, the outlook will remain bearish. However, if history is any indication, November and December have always been the busier ones that see a hike in prices. Also, as dollar slides, Bitcoin might see a recovery.

After riding the bulls for quite some time, now Dollar’s bulls days seems to be over. The US dollar weakened and the Treasury yields pulled back after a top Federal Reserve official said US interest rates are neutral while cautioning about the slowing economic growth. Meanwhile, uncertainty over Brexit has already created instability among the currency and other markets.

“Investors are starting to look at the vice chairman’s remarks this morning as perhaps a little dovish, and it is bringing up worries about global growth.”

Policy makers have already raised the rates three times this year. Markets have been pricing in the chances of another hike next month and dollar benefitted from these expectations for higher US rates, rising about 4 percent.

“When you get people talking about the economy slowing down, they may not raise rates so quickly or as aggressively and that is bearish for the dollar.” 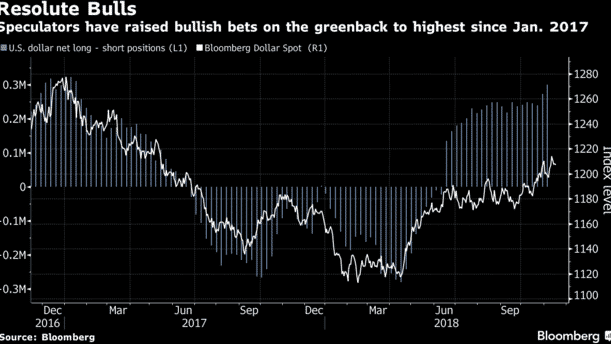 According to Morgan Stanley, the bull run of the dollar has ended. Hans Redeker, global head of FX strategy at Morgan Stanley said,

“We believe the USD has reached its peak at around current levels. The USD may weaken as credit spreads widen, equity prices fall, and sovereign bond yields also begin falling amid disinflationary pressure and falling oil prices.”

Another sign of more weakness coming for the dollar as per Morgan Stanley is the recent foreign flows into the US assets that have been short-term and are prone to a quick reversal as he says,

“Instead of strong inward foreign direct investment or other long-term flows, we see evidence that flows to the U.S. have been into money market funds and are carry trade motivated.”

The foreign-exchange team of Goldman has also said that greenback is approaching its peak. Credit Agricole sees a weaker dollar as well.

Dollar’s bearish momentum will be further driven by the falling oil prices, tighter liquidity in US markets, and slowing American economy. This is expected to benefit the emerging markets and countries that are reliant on USD-denominated funding.

Facebook Twitter LinkedIn Xing
Sagar Saxena
216 Articles
Passionate about Blockchain and has been researching and writing about the Blockchain technology for over a year now. Also holds expertise in digital marketing. follow me on twitter at @sagar2803 or reach out to him at sagar[at]coingape.com