The twitter account – @bitcoin, is one of the most iconic user for any crypto investor. One must not confuse with him the creator of Bitcoin or even the core developing team. Nevertheless, the sheer name has a lot of gravitas to influence the markets. The account has about 1 million followers.

The account administrator has now actually stopped following majority of altcoin projects and its creators. In an announcement of the move, the account holder attacked Justin Sun, the creator of Tron cryptocurrency. He ironically mocked Sun for creating unnecessary hype around Tron developments.

Earlier, popular Bitcoin maximalists denounced the account for its support to Bitcoin Cash [BCH]. On many instances the account holder declared that ‘BCH is BTC’. WhalePanda, popular crypto-trader and market analyst, noted yesterday,

Looks like @bitcoin deleted all the $BCH propaganda. Interesting.

Moreover, it did not stop there; while the move was praised by the majority, crypto-twitter requested for further cleansing of the account. The account administrator was asked to un-follow accounts that were not relevant to Bitcoin. The target, however, was largely Roger Ver, the lead proponent of BCH.

Roger Ver was recently denounced by crypto-twitter for his misogynist comments on Jack Dorsey and Lightning Labs lead Elizabeth Stark. The mockery for the comment hasn’t ended to this day, Charlie Lee, the creator of Litecoin [LTC] tweeted,

I have no proof of this, but I think the owner of @bitcoin must have had a romantic relationship with Roger Ver and recently broke up with Roger. That’s the only thing that can explain why @bitcoin stopped supporting BCH.

It was all taken in good spirit by everyone, even retweeted by @bitcoin. Apart from Sun, there are a number of other followers that have been reduced as well, Roger Ver and his site Bitcoin.com, is one of them. Currently, it is following only 14 people and most of them can be classified under Bitcoin maximalists.

Do you appreciate the move made by @Bitcoin or it should become more accommodating again? Please share your views with us. 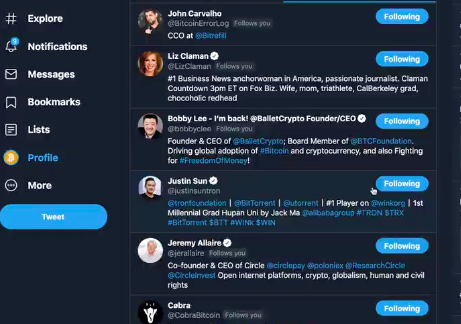 Article Name
'Bitcoin' Twitter Handle Mocks Justin Sun as it Sheds Altcoins
Description
The twitter account - @bitcoin, is one of the most iconic user for any crypto investor. One must not confuse with him the creator of Bitcoin or even the core developing team. Nevertheless, the sheer name has a lot of gravitas to influence the markets.
Author
Nivesh Rustgi
Publisher Name
CoinGape
Publisher Logo