On one side Bitcoin and altcoins are plummeting while on the other side as the US-China trade war takes a turn for the worst, the stock market, oil, Dollar, yen and others fall down.

Bitcoin at $6,270 while altcoins crash hard

Crypto market is yet again in the red. It all re-started yesterday when Bitcoin was at around $6,500 level. At the time of writing, it has been sitting at $6,270 with over 3% drop. Today’s price movement range of Bitcoin has been extremely short at $6,228 and $6,291. With a market cap of $108 billion, it is managing the daily trading volume of $3.9 billion.

However, some attributed this fall in prices to the fact that tether stopped working yesterday due to issues with its Omni layer.

Moreover, as usually happens in a bear market, Bitcoin falls and altcoins falls even harder leading to a rise in BTC dominance which is currently at 56.3%. And cryptocurrencies are crashing from top to bottom except for a few ones like Steem, today’s highest gainer with over 14% gains and XRP by 6%. QUASH and CyberMiles are also in the green by really small percentages.

Also, read: Bitmain May be Sued by Investors Over Misrepresentation and Omission of Information

But cryptocurrencies aren’t the only ones that are taking a hit right now. Actually, the world is seeing a drop down in other sectors as well, all because of the US-China trade war that further intensified.

US President, Donald Trump announced on Monday that he has great respect for Xi Jinping, Chinese President but US deficit was too big. He further Tweeted:

Tariffs have put the U.S. in a very strong bargaining position, with Billions of Dollars, and Jobs, flowing into our Country – and yet cost increases have thus far been almost unnoticeable. If countries will not make fair deals with us, they will be “Tariffed!”

Larry Kudlow, director of the National Economic Council also stated that Trump hasn’t been satisfied with the trade talks with Beijing and that “the president has suggested tariffs on a couple $100 billion” of Chinese goods.

He also shared, “He has not been satisfied with the talks with China on this. My guess is that an announcement will be coming soon.” Now, this led the stocks to close lower, oil prices to drop, and even Dollar took a slide.

The Dow Jones Industrial Average fell over 92.55 points to 26,062 and S&P 500 had a 0.6 percent dip. The Nasdaq Composite also dropped about 1.4 percent which has been its worst day since July-end. This has been while Apple slid down 2.6 percent while Micron and Amazon shares also dropped. 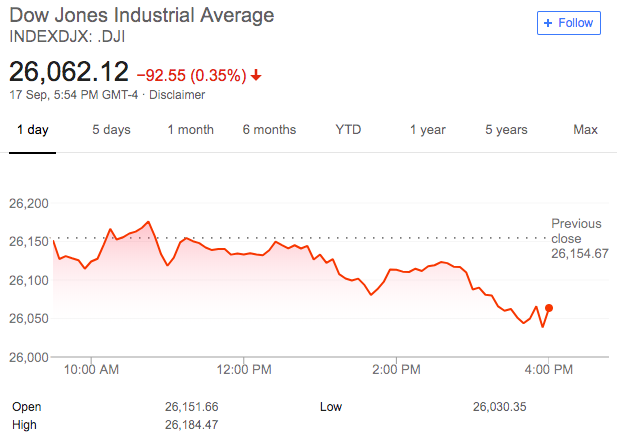 Though US stock futures posted gains, it has been stated that these tariffs will only provide short-term relief but with lingering risks. This further leave China with “no choice but to retaliate simultaneously.”

As the focus has shifted to fresh tariffs and trade dispute, the dollar index also took a hit. The index is currently trading within a narrow range at about 94.50.

The trade war has affected the Chinese stock market rather deeply as it opened at a four-year low. In Shanghai that has China’s biggest companies listed, the market dropped by 1.1% of its lowest point since November 2014. Its currency Yuan also took a hit and slipped. These tariffs on $200 billion of Chinese goods that range from garlic to steel are also putting trade talks at risk.

Furthermore, oil markets fell as the world’s top two oil consumers went on a trade war. Brent crude futures dropped 44 cents, or 0.6 percent, to $77.61 per barrel while US West Texas Intermediate (WTI) crude was down 28 cents, or 0.4 percent, to $68.62 per barrel. The scenario is pretty red around the world right now.