Popular and major South Korean crypto exchange, Bithumb has released the details of the two events starting November 12 involving the airdrop of 15 BTC along with Ethereum, XRP, among others.

One of the major South Korean crypto exchange, Bithumb has released the details on its airdrop season 3. After conducting one of its season in September, we reported last month about the second event that was to come soon. To celebrate its 5th anniversary, the popular exchange is giving away Bitcoin (BTC), Ethereum (ETH), and XRP to the winners.

The official announcement shares the details of the Super Airdrop covering two events. The first event will be conducted from November 12 to December 11, 2018. For the reward of 15 BTC, winners will be announced on December 24. It further details,

“After signing in to Bitsum, click on [Apply for Event] at the bottom, and you will receive

1 million won worth of Bitcoin (BTC) by drawing one of the application members.”

As for the second event, it will start from November 12 while the closing date will be declared in a separate notice. The event target is specified, “Top 500 cumulative transaction amounts for every 7 days.”

The rewards for this event will be distributed in BTC, ETH, and XRP among other things like coupons as shown below, 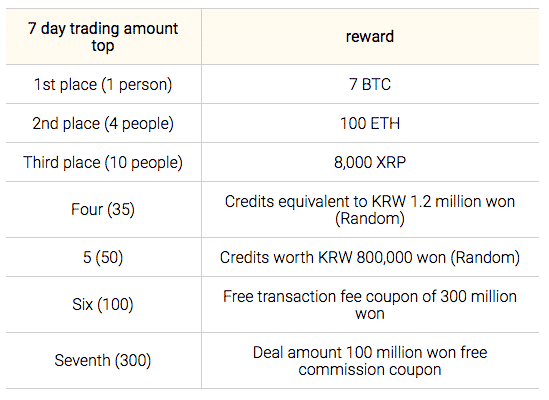 Airdrop, according to the website, is only available to 1 account with the highest transaction that will be based on the mobile number only for the member who purchases the coupon. Additionally, “In case of Air Drops 4 ~ 5, it will be paid out randomly among the passwords listed on the Company and converted into the closing price on the 7th day.”

It further specifies, the winning prize of 15 BTC is equivalent to 100 million won and despite the fluctuations in market price, “winner will receive 15 bitcoins.” Coming on to the coupons, the rough translation states, “Event coupon No. 2 applies only to the five types of passwords (Jet Cache, Monello, Dash, Bitcoin Gold, Omise go), and the password type can be changed after the announcement.”

Moreover, the event coupon is not refundable and the commission coupon paid as an event prize has only 1-month validity.

However, “this event may be changed or terminated prematurely,” a word of caution is pointed out by Bithumb with the statement that unfair transactions such as fraudulent transactions among others may be excluded from payment.

Casper Brown
382 Articles
I am an associate content producer for the news section of Coingape. I have previously worked as a freelancer for numerous sites and have covered a dynamic range of topics from sports, finance to economics and politics.
advertisement