The second largest exchange in the world by adjusted volume and the largest cryptocurrency exchange in South Korea, Bithumb has announced a Super AirDrop Festival- Season 2  to celebrate its 5th anniversary.

According to the recent announcement, Bithumb will regularly airdrop coins worth 100 million Won ($88,500) every day and investors who participate in this festival will be allowed to buy coupons and trade via the exchange.

Bithumb has invited you to Airdrop Event.
Don’t miss out and visit [https://t.co/jcYn5XqFyK] for details. pic.twitter.com/ItPkKacDyt

The coupon cost amounts to 10000 won ($8.85) and the participants must trade for a minimum of 1 hour on the platform in order to qualify for the airdrop. The airdrop festival will begin from October 8th until further exchanges. This festival is only permitted to the top 300 traders, each operating with a different airdrop amount depending on the rank. 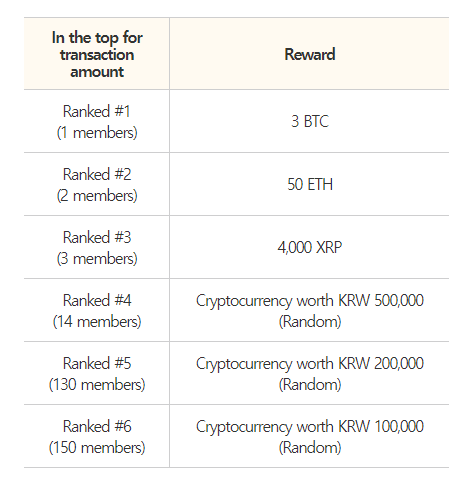 This is not the first time Bithumb has announced an airdrop festival. In September 2018, Bithumb conducted Season 1 of its ‘Super Airdrop Festival ‘, where it refunded traders 120% of trading fees. The exchange had also set aside then a limit of KRW 1 billion per day for the refunds, which came out to KRW 167 million (USD 149,000) of rewards each day. Although this event was marred with claims of Wash Trading. Earlier in March, Bithumb announced an ICON airdrop from 21 March to 25 March specifically for members who trade in excess of 1 million Won ($885). ICON hailed as the “Korean version of the ETH” shot up massively during the airdrop period.

It’s been a super interesting month for Bithumb as the exchange recently had an ownership change when the majority stake in Bithumb was sold to Singapore based BTC Global. the consortium, led by a chief plastic surgeon and avid blockchain investor Kim Byung-gun on 12 October for 400 billion won ($353.64 million). According to what is reported in some media, the airdrop is partly in celebration of the new owners. Apart from these the exchange has also added several coins to its trading services. Coins such as SALT [SALT], Raiden Network Token [REN], Enjin Coin [ENJ] and Primas [PST], Loom Network [LOOM] and BHP Cash [BHPC] were all added to Bithumb in the past few days.

This airdrop festival is expected to pull some good crowd to the exchange and one can see some good volumes in the coming days at Bithumb. One can just hope this airdrop is not marred by another malicious act like the previous one was with claims of wash trading.

Will Bithumb exchange scale new heights under its new leadership? Do let us know your views on the same.