Sudden rise in the trading volume of Bithumb

In a series of tweets, Alex Kruger, who is an Argentinian cryptocurrency trader, economist, and analyst, pointed out there is close to USD 250 million of fake volume traded at Korean crypto exchange Bithumb, every day at 11 AM Korean Time. According to him, the same has been going on since August 25. He explains the same by saying that Bithumb offers 120% payback of trading fees as airdrop with Daily Limit 1 billion KRW(USD 900000) to its users on “First Come First Served” basis Bithumb collects trading fees by charging 0.15% of the value of each trade on its platform. The trader’s wash trades are conducted by entering two opposite limit orders => Total fees 0.3%. Rebate is for 120% => 0.36%. He further states that to collect the full KRW 1 billion rebates a wash trader must have been trading KRW 278 billion. That is USD 250 million in daily fake volume. He concludes by saying that this is the reason that Bithumb is recording massive volumes and it shouldn’t be mistaken for bullish signals.

1/ There currently are USD 250 million of fake volume traded at Korean crypto exchange Bithumb, every day at 11AM Korean Time, since August/25. Tweetstorm covers the math behind it in simple terms. #washtrading illustrated.

2/ Bithumb offers 120% payback of trading fees as an airdrop.

To collect the full KRW 1 billion rebate a wash trader must thus trade KRW 278 billion. That is USD 250 million in daily fake volume.

Since its first come first serve bases the trader that is exploiting this lapse, has been trading the maximum $250 million at 11 AM Korean time every day. Krüger, who shared a chart to show the user’s daily trading pattern on Bithumb, wrote,

“notice how 31K bitcoin (KRW 252 billion) are traded at exactly 11 AM. The remainder KRW 26 billion are traded in other coins.” 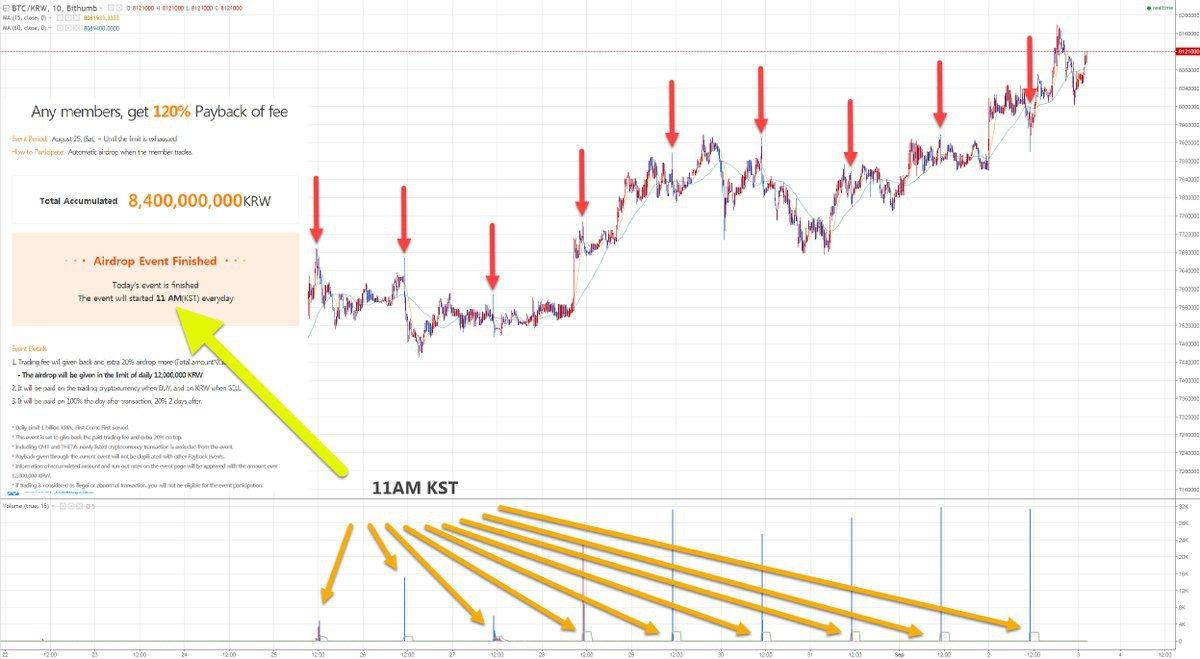 Bithumb and the history of blames and lapses

This is not the first time Bithumb has been blamed for its security lapses. In December 2017  Bithumb was blamed for allegedly manipulating ripple prices. Then the allegations against Bithumb was that the users were not able to sell their Ripple at the market rate and could only price it at a price above the rate, thereby only were able to place an ‘Ask Order’.

In June 2018, Bithumb had temporarily suspended its deposit and withdrawal services as it was hacked and cryptocurrencies worth $30 million was stolen.

*All deposit and withdrawal service will be stopped to make sure the security. We will keep notice you of the restart of the service. We apologize for your inconvenience and thanks for your understanding.

In July 2018, Bithumb again hit the headlines, as its traders experienced an abnormal surge in the price of some cryptos, with tokens like Ethos trading six times over its average value only on the South Korean exchange. Many traders began to attribute these ludicrous prices to the Kimchi Premium, a term used by some to describe the gap between cryptocurrency prices on South Korean exchanges and foreign exchanges. But with strict rules in place and the hack event just a month back, many too believed this could a price manipulation activity. Even Kimchi premium was being viewed with a keen eye by the regulators.

With leading names like Bitfinex and Bithumb being blamed for price and volume manipulations, it clears out the fact that these new exchanges need to ramp up their systems, technologies, and compliances to be able to match up the traditional exchanges. It is very important to gain the trust of the community and lapses like these are not doing any good to build that trust.

Will Bithumb accept and act on this allegation and strengthen its systems? Do let us know your views on the same.