South Korean crypto exchange Bithumb has announced the details cryptocurrencies stolen in the hack that shook cryptocurrency world. The details released unveiled the amount of each coin missing and a compensation plan, for its customers, the equivalent value of the lost coins in an undetermined cryptocurrency.

The damage is only half of reported earlier

When the hack took place, it was reported that 35 billion won (about 31.5 million USD) worth of cryptocurrencies vanished. But the actual amount now revealed, post the investigation, comes out to “about 19 billion KRW instead [~$17 million]” after undergoing a “continuous recovery process.”

The exchange elaborated in its statement

“The main reason for the reduction of the damage is due to the ongoing participation, support, and cooperation of cryptocurrency exchanges and cryptocurrencies foundations across the world. Also, our quick response to the cyber-attack by removing cryptocurrencies from hot wallet to cold wallet effectively contributed to reducing the overall damage.”

Which coins were stolen 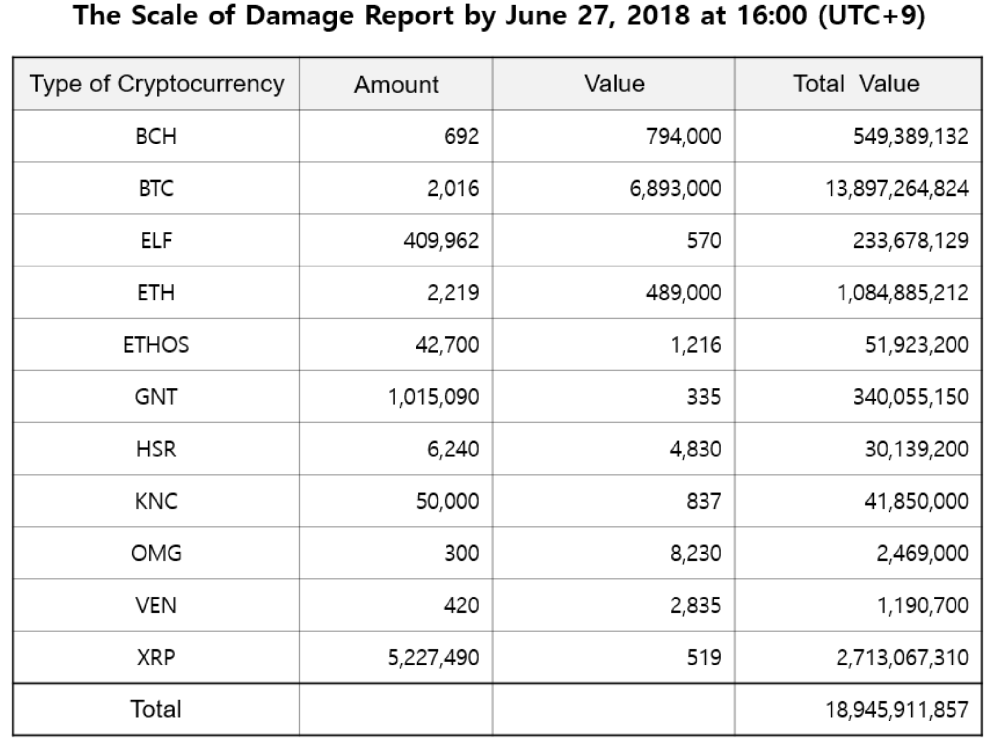 Bithumb has also unveiled its proposal to reimburse all affected users. Restating that it takes full responsibility, the exchange announced that it is organizing “a compensation airdrop event.” Members must apply for compensation from the theft to be eligible for the distribution. For the inconvenience of keeping customers’ coins tied up, the exchange is offering interest between the time of application to the date they are fully compensated.

“The annual interest rate of 10% will be prorated over the period, hence the longer you hold, the higher compensation becomes,” Bithumb emphasized. “The amount of cryptocurrencies held will be calculated from 8:00 PM ~ 9:00 PM (UTC+9) each day starting from the date of application until the end of the [compensation] period.”

In addition, Bithumb is offering commission fee-free trading coupons for all interested customers for the inconvenience caused to them.

“Commission fee-free coupons will be available for purchase each day (the coupon is zero cost, useable for 1 day and it can be purchased once every day),” Bithumb detailed, adding that once it is purchased, it does not stack and can only be purchased when another coupon expires.”

Bithumb has really done well in its endeavors to save its customers from the losses due to hack. It was also reported that the exchange had announced that it will fully pay the customers using its own fund even though its insurance is unlikely to cover the loss. Such commitments from exchanges are necessary to keep the investor sentiment intact in cryptos

Will other exchange also follow the example what Bithumb has set in terms of protecting its customers? Do let us know your views on the same.