Financial Service Agency (FSA) has finally approved the license for hacked crypto exchange, Coincheck to resume their operations as reported by local media agencies. Japan might look cryptocurrency with a new perspective this year.

Coincheck which was once the largest cryptocurrency exchange in Japan suffered a $533 million hack in January 2018. The exchange was however allowed to reinstate its crypto activities in November under a provisional license. Certainly, the report indicates that Coincheck can now begin complete crypto operation in Japan as it has finally registered as a crypto exchange with Kanto Financial Bureau, Financial Services Agency in Japan. 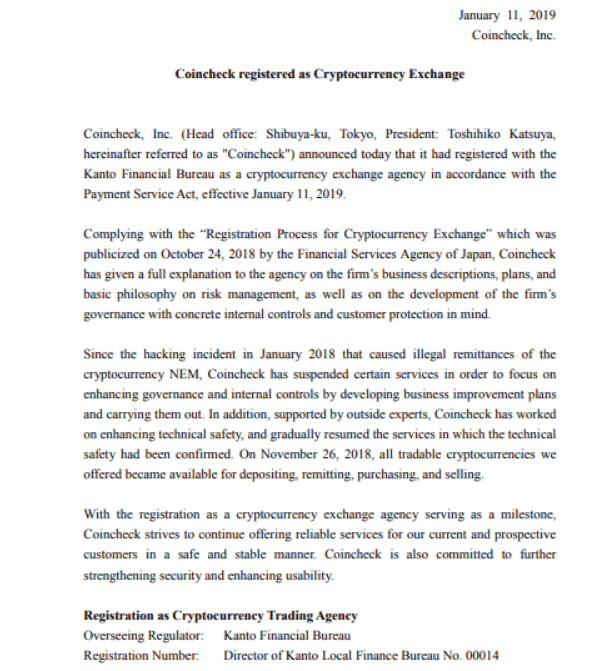 Since Coincheck’s hack resulted in illegal remittances of the NEM cryptocurrency in early 2018, the ‘Financial Services Agency of Japan’ is ensuring to re-enter exchange by making it fully-compliant with the set rules. Accordingly, the report notes that the ‘exchange’s technical safety had been confirmed’. Here is a note from the official report released which reads;

Complying with the “Registration Process for Cryptocurrency Exchange” which was publicized on October 24, 2018 by the Financial Services Agency of Japan, Coincheck has given a full explanation to the agency on the firm’s business descriptions, plans, and basic philosophy on risk management, as well as on the development of the firm’s governance with concrete internal controls and customer protection in mind.

The service approval is enforced from January 11, 2019, with toughening rules, clear regulations and privacy terms. When the hack event happened, it appeared as the major dent to the overall reputation and operation of the firm –moreover, the exchange has reportedly announced to reimburse $0.81/dollar of stolen NEM to the victims.

Established in the year 2012, Coincheck is the bitcoin exchange service firm founded by two founders – Koichiro Wada and Yusuke Otsuka. Later in April 2018, the exchange was bought by ‘Monex Group’ for $33.5 million. Monex Group committed to bringing the platform again and as such the approval by FSA is more like a ‘responsibility’.

Following the purchase, Monex Group reopened Coincheck trading with the ‘provisional license’ in November 2018 and meantime applied for the registration. Indeed, the application is approved under the Payment Service Act, effective from January 11, 2019. Nevertheless, the Monex Group is a fully owned subsidiary for Coincheck which is now registered as crypto exchange agency with the Kanto Financial Bureau.

With the registration as a cryptocurrency exchange agency serving as a milestone, Coincheck strives to continue offering reliable services for our current and prospective customers in a safe and stable manner. Coincheck is also committed to further strengthening security and enhancing usability.