Per the latest Bloomberg report, Tether and not Bitcoin is the world’s most used cryptocurrency. While accurate figures on trading volume are difficult to find, data from CoinMarketCap shows that the token with the highest daily and monthly trading volume is Tether. As a matter of fact, Tether’s volume surpassed that of Bitcoin’s for the first time in April. Moreover, it has consistently exceeded it since early August and stands at about $21 billion per day. Interestingly, the latter’s market capitalization is more than 30 times smaller and the token is surrounded by several controversies that make the integrity of the coin questionable. 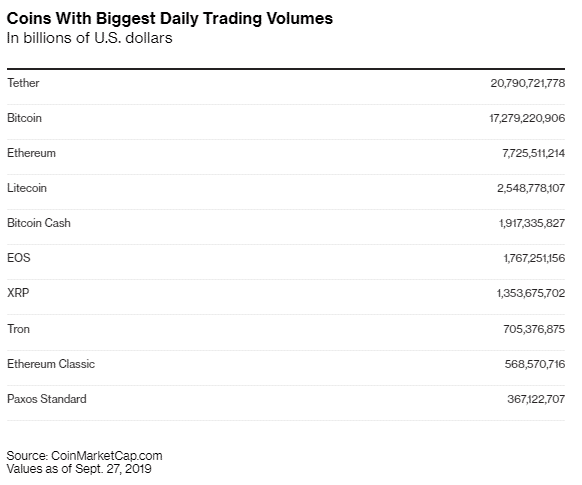 All is not glorious in the “Tether” paradise. Tether is under the watchful eyes of New York authorities for embezzling funds which include reserves. Thaddeus Dyrja, a research scientist at Massachusetts Institute of Technology, alleges that many people are clueless about Tether. It is just a substitute for traditional financial institutions and crypto exchanges who cannot hold dollars on behalf of their customers.

“If there is no Tether, we lose a massive amount of daily volume — around $1 billion or more depending on the data source,”

“Some of the concerning potential patterns of trading in the market may start to fall away.”

Recently, a report was produced by Bitwise Asset Management showing the existence of faked volumes in the cryptocurrency market. While it cannot be disputed that there are issues with exchanges reporting fake volumes, it is hard to concur if CoinMarketCap is reporting actual volumes.

Bitwise’s report to the SEC lists Binance and Bitfinex as two of the 10 exchanges that have actual crypto volume. Interestingly, Tether, as per its whitepaper was designed to be something called “ Proof of Reserves” backed by the US dollar, to be pegged to USD. While as per the custody part of its presentation, audits in crypto should be easy to carry out. However, no audit was ever completed for Tether.

The audit was terminated citing complexity and thus no external auditor ever completed this process. Also, just like Bitfinex, Tether has had its fair share of Banking problems. The Bitwise report even states that Tether isn’t a stablecoin at all.

While the judges alleged that Tether, felt like a ” calm in the storm”, it implies that Tether is backed by Bitcoin and not the US dollar.

The recently released BTI report even revealed that Coin Market Cap ranks exchanges by trading volume without carrying out any basic checks. This, in turn, motivates trading platforms to report false data and gain traction by getting listed on the website.

With that being said, exchanges and market cap data providers are more than happy to list Tether without any checks as it helps them avoid the watchful eyes of government authorities, as stablecoins put forth the trust in the hand of tech giants. While the idea is great, atleast in theory, it is evidently susceptible to abuse like the fiat currencies.

Tether is key to their growth, many crypto exchanges would likely be willing to bail it out if needed

The report further suggested that in terms of wash trading USDT becomes the largest cryptocurrency to be wash traded, among the top-40 leading exchanges. As per data over the past 90 days, the figures stand high at 67.3%

As a matter of fact, among the top 100 exchanges on CMC, there are 73% exchanges that have been actively wash trading over 90% of their volume. Interestingly, only a handful of exchanges on CoinMarketCap publish true volume of trades.

“Whether or not Tether was backed by the dollar actually wouldn’t matter if everybody agreed to take Tether and to value them at a dollar themselves.”

He also talked about the controversy surrounding the company when NYAG alleged that Bitfinex covered up an $850 million loss by accessing at least $700 million worth of the $900 million in USDT tokens from Tether’s reserves.

Furthermore, he said that despite the fact that Tether was not able to access those funds, the price of USDT remained stable at $1, suggesting that this what people valued at. This statement further raised an issue, as Tether’s dollar peg termed it a stablecoin. The value is supposed to be driven by the fact that it is backed by the US dollar and not by the community’s sentiments.

While Bloomberg’s article tries to justify Tether’s prominence as the “most-used cryptocurrency” the postulation seems half-baked and lacks depth. Undoubtedly, CoinMarketCap serves as a leading data provider for traders and analysts, but the incidences of fake trading volume and lack of checks by the platform is something to ponder upon and question. Moreover, Tether’s fair share of woes with NY authorities, no audits, and fake trading volume reports are enough to surmise that it still has a long road to travel before it can compete with Bitcoin.

advertisement
✓ Share:
Disclaimer
The presented content may include the personal opinion of the author and is subject to market condition. Do your market research before investing in cryptocurrencies. The author or the publication does not hold any responsibility for your personal financial loss.
About Author
Supriya Saxena
Coming from a physics background the unpredictability and intrigue of the cryptoverse attracted me to take a dive in this field. I am all eyes and ears for the latest trends in blockchain and crypto sphere. Whenever I am not writing or researching, I love to read sci-fi novels, play basketball and watch action movies. I strongly believe that blockchain and cryptocurrency will bring lasting transformations in people’s lives in the years to come. You can reach out to me at supriya [at] coingape.com.

Twitter LinkedIn
Supriya Saxena
216 Articles
Coming from a physics background the unpredictability and intrigue of the cryptoverse attracted me to take a dive in this field. I am all eyes and ears for the latest trends in blockchain and crypto sphere. Whenever I am not writing or researching, I love to read sci-fi novels, play basketball and watch action movies. I strongly believe that blockchain and cryptocurrency will bring lasting transformations in people’s lives in the years to come. You can reach out to me at supriya [at] coingape.com.