CrazyCroco is a Non-Fungible Token (NFT) art project consisting of 8888 algorithmically generated  unique arts of Crocos. The collection is made of 150+ hand illustrated traits of the character. This Solana based NFT has just revealed its project roadmap and has started turning quite some eyes within 4 days of its community going live on discord. CrazyCroco aims at being the biggest utility NFT on the Solana Ecosystem.

According to their website, CrazyCroco is a limited NFT where the token itself doubles as a stake in profits from everything that the project has in it’s roadmap.

Twitter has already started getting flooded with people after the roadmap was revealed & influencers starting to talk about CrazyCroco, checkout their page – twitter.com/crazycroconft.

Crocodiles are known to be the oldest creatures to have survived in the world (also referred to as evolution’s greatest survivor) as they have been making their way with very minimal genetic modifications over millions of years. The project claims to give it’s exclusive members an access to a post-apocalyptic metaverse where only Crocos would be the survivors.

CrazyCroco aims at creating a cult, for NFT lovers, around conservation initiatives for Crocodiles. The project is currently working on some charities to Crocodile shelters across the world.

One of the coolest and most unique things CrazyCroco is doing is minting 8888 unique merchandise as NFTs for its community members. The fact that every art and merchandise is unique creates immense value for the person holding it. The holder of the NFT gets all rights to the art and can further use the CrazyCroco community to grow their own brand or collection of merchandise.

The owner reserves rights to produce multiples of merch or any other product having the art. The project also let’s its members sell versions/derivatives of the art on CrazyCrocos official merch store and earn 20% royalty on all sales (Crazy Croco takes care of all production shipping and marketing). In a nutshell, the members earn a whopping 20% of the profit straight out of owning a Crazy Croco and being a part of the community.

The project is looking at more areas of making the cult a true value for its members by organising events, eventually working on a game (like crypto kitties) and in the words of the crazy croco team, ‘make it massive’. The project is currently working on celebrity tie ups and creating micro communities around the globe. 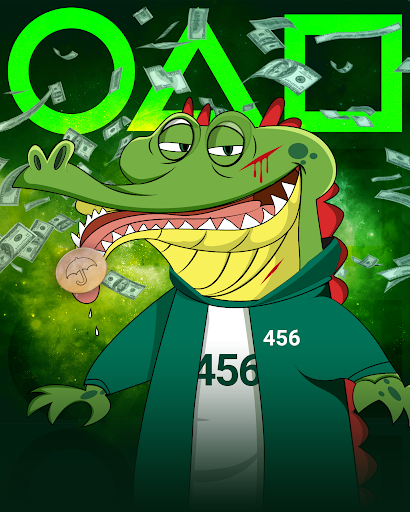 Crazy Croco plans to collaborate with artists, shows and brands by releasing limited edition NFTs inspired by USPs of the collaborating entity (you can see the banner with an NFT inspired by the popular Netflix Series “Squid Game”).

However, luxury brands have been exploiting the species for their majestic skin & the project would call out brands that exploit Crocodile Skin through it’s ironic art that mocks such brands. The above art shows a Crazy Croco wearing luxury brand Louis Vuitton for fun.

The project is currently geared towards its upcoming mint date (within 2 weeks). The exact date is still unknown, however, more info can be found on their discord channel

✓ Share:
Disclaimer The presented content may include the personal opinion of the author and is subject to market condition. Do your market research before investing in cryptocurrencies. The author or the publication does not hold any responsibility for your personal financial loss.
Stan Peterson
393 Articles
Being an active participant in the Blockchain world, I always look forward to engage with opportunities where I could share my love towards digital transformation.
Similar Post