Often the newbie in crypto space follows major influencers/ known personalities to find their opinion on any specific coin or the particular currency they see more potential in. However, a new browser-based extension ‘Coinflict of Interest’ shows you the bias/concern towards Bitcoin (BTC), Ethereum (ETH), XRP and Bitcoin Cash (BCH). Moreover, the app is still in beta version and one can find which influencer is promoting which cryptocurrency.

Get to know Which Cryptocurrency, Influencers are Supporting?

Reports revealed that the developer ‘Luke Childs’, has released a new tool as a browser extension that lets you find what cryptocurrencies influencers are more interested in and talk about. The key purpose behind ‘Coinflict of Interest’ is to show the conflict of interest or bias in crypto space, reports noted. This extension is presently available on Opera, Google Chrome and Firefox browsers with top cryptocurrencies including BTC, ETH, XRP, BCH. 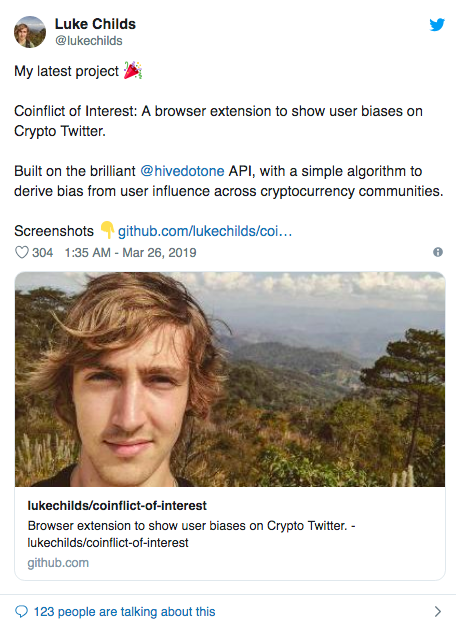 It sneaks at what crypto tokens few influencers are majorly supporting– however, the tool looks quite accurate but the developer feels that it needs to be more accurate. To make the information and underlying algorithm more accurate, Luke Childs is using data from hive.one, another crypto project that gathers enormous data regarding crypto community.  To note, both projects are open source where Luke Childs developed Coinflict of Interest whereas Hive. One is developed by Hive.one’s own team.

Two browser extensions are going live today. Both are inserting our data directly on Twitter profiles.

CZ seems to be supporting Ripple (XRP) more, despite he encouraged people to build BNB;

Blockstream CEO and Co-founder, Adam Back is a Bitcoin Proponent

How Does it Work?

Luke Childs explains the way the algorithm drives this result;

Takes your influence ranks from @hivedotone  for select cryptocurrency communities, reduces each value exponentially relative to the difference from the largest value, calculates these as a percentage of the values combined, and then removes any values below a certain threshold.

You can download Coinflict of interest extension on Chrome here , Firefox user can download it from this link and Opera users should visit here

Speaking about the ‘Coinflict of Interest’, Luke Childs says that;

“I’m doing some post-processing on that data, running it through a simple algorithm to try and deduce bias from influence. There would need to be some sort of sentiment analysis of users tweet content to work out if they are engaging in a positive or negative manner. I would expect that to drastically improve the results,”