According to the latest research, 3 altcoins have already started making their way to a bull run that could mean the bull run in the crypto market just might be already getting ready to affect the market.

Crypto Bull Market: Here’s How it could Already be in Effect

Everyone is in anticipation of the next bull run after the entire crypto market hit $800 billion at its peak.

So, when is this bull run coming? Could it already be into effect?

“The bull market has started. It’s not about “when” anymore – it’s about “who”,” says the latest research by Santiment, which further shares that it is a possibility the crypto bull run is in action,

“The recent price ‘movement’ of Bitcoin and Ethereum has been boring to say the least. It’s been so uneventful these past few weeks that we’re already seeing memes pop up about BTC as the next big stablecoin. Although BTC and ETH aren’t growing (and they have enough reasons not to), quite a few tokens/networks on the ethereum blockchain have been blinking on our bull radar recently.”

Basic Attention Token (BAT), Ox (ZRX), and Maker (MKR) are the ones that have been showing bullish moves and following three patterns.

ETH Decoupling is one of the primary reasons, “Historically, the price of these 3 tokens faithfully mirrored ETH – not anymore. Particularly over the last month or so, we’re seeing a number of ERC 20 projects completely break their ETH price interdependence and start dancing to their own beat. And you have to admit – it’s a pretty catchy tune.” 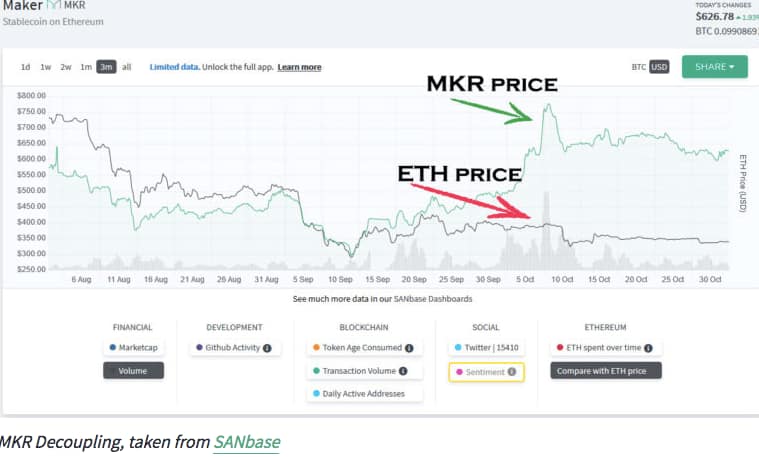 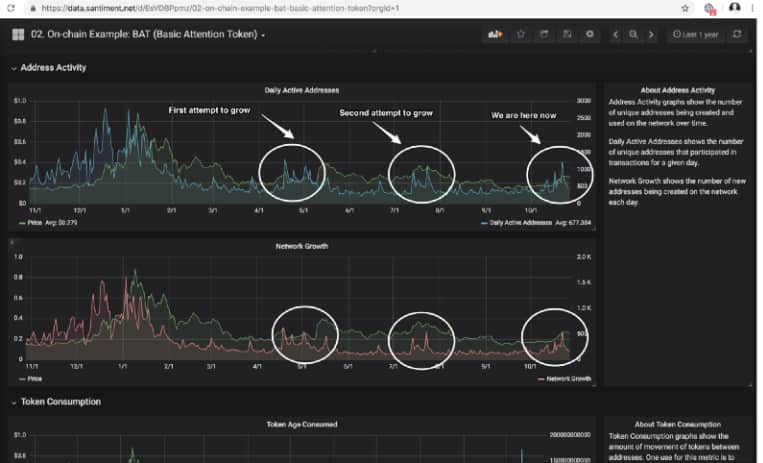 BAT’s on-chain activity shows a healthy pattern where both price and speculative activity is steadily growing. Moreover, it mentions, “ZRX recorded the most explosive spike across all observed metric, with MKR not all too far behind.”

It then moves onto the social volume which is based on “behaviour analysis” of the platform with crowd sentiment measurements. This metric basically covers the number of mentions of a token on social media.

“While action is bullish, we believe you don’t want to buy at extreme values on social volume, as such activity might mark a short-term top. So we have waited until the attention of the traders crowd has declined to more or less normal levels.”

Talking about the 2016-17 bull run, the research states, “ETH launched the explosive bull run and BTC followed.” And this time, these three altcoins are “done waiting for ETH to bounce back, they’re paving their own bull run.”

Eventually, this price movement is expected to find its way to ETH as well. However, it does caution, “We might still see some decline if the whole market needs to make one more low.” But “the risk is now to break to the top in the “healthy” tokens.”