As President Donald Trump announced he was doubling metals tariffs, the Turkish Lira (TRY) slumped weakening the value of currency the Turkish held, thus deepening the crises in the country. To find shelter amidst this downpour, the Turkish citizens started buying bitcoins dumping the Turkish fiat Lira.

Trading volume on Turkey’s cryptocurrency exchanges surged Friday as the country’s fiat currency plunged to record lows on political and economic jitters. The Turkish lira plunged by more than 20% against the dollar after the president announced the move, amid a widening dispute between Washington and Ankara over the imprisonment of the US pastor Andrew Brunson. The Turkish lira hit an all-time low against the dollar, reflecting global market worries about President Recep Tayyip Erdoğan’s economic policies and his instigating political disagreements with countries that were major trade partners and major sources of investment inflows especially the USA.

I have just authorized a doubling of Tariffs on Steel and Aluminum with respect to Turkey as their currency, the Turkish Lira, slides rapidly downward against our very strong Dollar! Aluminum will now be 20% and Steel 50%. Our relations with Turkey are not good at this time!

Terming the relations with Turkey are not good at this time, the President revealed an increase in US taxes on Turkish steel imports to 50% and on aluminum to 20%. The lira has been under sustained pressure on foreign exchanges, dropping by almost 50% against the dollar in the past 12 months and hitting a succession of record lows this week. Inflation reached an annual rate of 15.9% in July – more than five times the average rate for wealthy nations – and government borrowing in foreign currencies has risen dangerously high.

Even before Trump’s tweet, the lira had plunged 14% as investors rushed for the exits from Lira to safe havens such as the USD, JPY and other assets including the Bitcoin.

Ranko Berich, the head of market analysis at Monex Europe, was quoted by the Guardian saying that the Turkish president’s combative speech had further damaged international trust in its currency.

“Erdoğan has reached for the crazy stick and given the lira another whack in a rambling speech that focused more on combative rhetoric than addressing market concerns,”

Bitcoins come to the rescue of the people in Turkey

Since the crises sparked and the Lira started plunging a lot of investors shifted their holding to Bitcoins and other cryptos especially the Bitcoin. Trading volume on Turkey’s cryptocurrency exchanges surged. According to CoinMarketCap, volume at Turkish exchanges Paribu and Btcturk have jumped

Although compared to the global volume the numbers are small, but the past 24 hrs volume is much higher than the average volume over past 7 days and further higher if the average of a 30-day volume is taken. The BTC Lira on a weekly chart is also upward moving currently trading at BTC/TRY trading at 38,587.0 up almost 4 % while reporting. 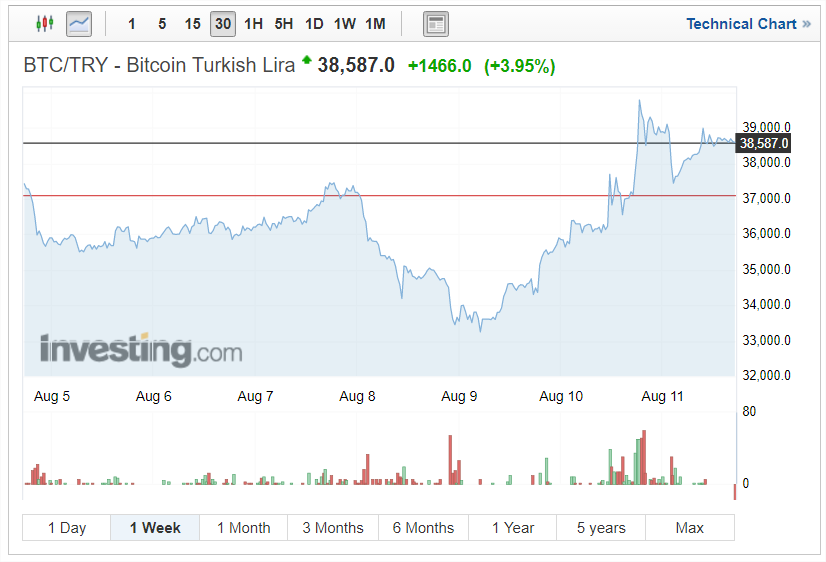 “Would love to see #bitcoin volume stats/demand from turkey today during #turkishlira crisis anyone have this data?”

Would love to see #bitcoin volume stats/demand from turkey today during #turkishlira crisis anyone have this data?

Large sums borrowed in foreign currencies make Turkey especially vulnerable to a falling domestic currency because it now it becomes more expensive to pay off its debts. As more and more countries move towards financial crises, the citizens there are embracing Bitcoins over Fiats which are slowly losing value. Although a large number of people now hold bitcoin worsening economic conditions are not a good sign for countries. First, it was Venezuela, Iran and Now Turkey

Is Bitcoin the solution for a country like Turkey whose Fiat is failing? Do let us know your views on the same.

Share on Facebook
Share on Twitter
Share on Linkedin
Share on Telegram
Post your comment...
Sunil Sharma 137 Articles
Sunil is a serial entrepreneur and has been working in blockchain and cryptocurrency space for 2 years now. Previously he co-founded Govt. of India supported startup InThinks and is currently Chief Editor at Coingape and CEO at SquadX, a fintech startup. He has published more than 100 articles on cryptocurrency and blockchain and has assisted a number of ICO's in their success. He has co-designed blockchain development industrial training and has hosted many interviews in past. Follow him on Twitter at @sharmasunil8114 and reach out to him at sunil (at) coingape.com
Follow Sunil @
Facebook Twitter LinkedIn
Our premium partners