Good news for Bitcoin as the South Korean financial regulator is reorganizing so it can accommodate new innovations such as cryptocurrencies and blockchain.

Korea has been one of the front-runners when it comes to cryptocurrencies whether it’s innovation, marketability, adoption or creation. Same was expected when things move to regulations and Korea has lived up to it.

Preparing for the fourth industrial revolution

Financial Services Commission, the financial regulator in South Korea, has proactively started working preparing for what it calls the fourth financial revolution which is the innovations in the financial industry. It has reshuffled its existing organizational structure and also created two new departments understanding the challenges that may arise in the future.

The first of the two new departments namely Financial Consumer Bureau which would be responsible for financial consumer protection, currently scattered around the sector-specific bureaus.

This new department will also be responsible for household debt policy on top of microfinance policy for financially marginalized households. The second new department which is called the Financial Innovation Bureau will take care of policy initiatives for financial innovation such as financial services which use fintech or big data and also responds to new developments and challenges such as cryptocurrencies. 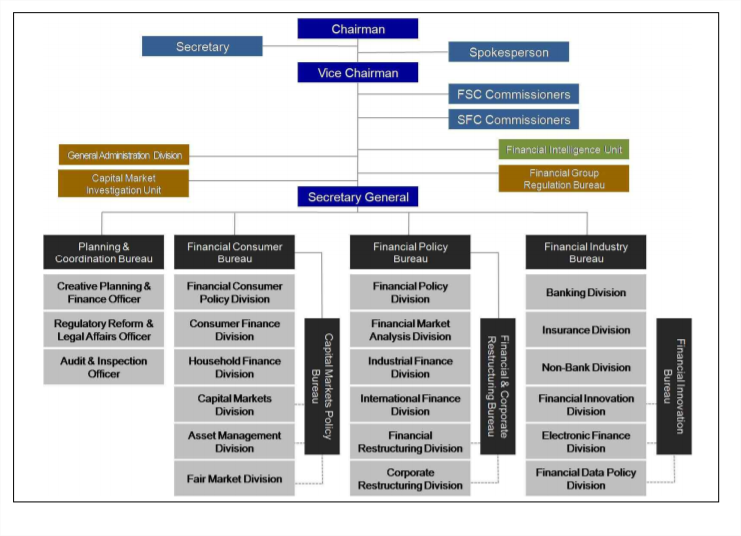 The existing departments also see a change as the current Capital Markets Bureau has been renamed as Capital Market Policy Bureau which would fall under the purview of the newly formed Financial Consumer Bureau. The current Banking & Insurance Bureau will be reorganized to be named as Financial Industry Bureau and would look after the Banking division, Insurance division, Non-Bank Division, Electronic Finance Division, Financial Data Policy, and the newly formed Financial Innovation Bureau.

This restructuring comes after the international Financial Stability Board (FSB) of the G-20 nations, which also includes South Korea, found that,

“bitcoins and cryptocurrencies do not at present have any material risk to the global financial system and encourage countries to take a soft but vigilant approach towards them. It could be assumed that Korea is taking the lead as the world softens its stance on cryptos.”

Korea promoting a conducive regulatory environment for bitcoin & other cryptocurrencies

This restructuring is not the only change Korean regulator is bringing in to make the country crypto friendly. The Financial Services Commission earlier had revised its guidelines relating to “all activities” of Korea’s leading cryptocurrency exchange operators. In May the country’s Supreme Court had recognized cryptocurrencies including bitcoin as assets, overturning all the lower courts decisions.

The country, on lines of China, had banned the ICO’s. But in May, the National Assembly Committee working on the Financial revolution said it would try to find a way to improve the legal “basis” of cryptocurrency in the country, part of which would be moving back the ban on ICO’s which the government enacted in September 2017.

As Korea moves to ready itself for the next industrial revolution, of which blockchain and cryptocurrency would be a major part of, it leaves a roadmap for other countries to regulate than restrict cryptocurrencies. Now it’s only time that will determine which countries follow this.

Will other countries also follow Korea’s stance on cryptocurrencies? Will this news help bitcoin prices continue the ongoing surge? Do let us know views on the same.

Coingape is committed to following the highest standards of journalism, and therefore, it abides by a strict editorial policy. While CoinGape takes all the measures to ensure that the facts presented in its news articles are accurate.
Disclaimer The views, opinions, positions or strategies expressed by the authors and those providing comments are theirs alone, and do not necessarily reflect the views, opinions, positions or strategies of CoinGape. Do your market research before investing in cryptocurrencies. The author or publication does not hold any responsibility for your personal financial loss.
Instant loans by local bank transfer using your crypto as collateral
Share on Facebook
Share on Twitter
Share on Linkedin
Share on Telegram
Author: Sunil Sharma