After the reflection of January’s bitcoin fall in the stock market’s Dow Jones and S&P 500, it has been found that there has been an increased amount of correlation between the cryptocurrency and stock market. This has led the stock market investors to follow the crypto sentiments.

Also, read … Will ICO Issuers Face Lawsuits In Near Future

Last month, when bitcoin fall down below $6,250, the Dow Jones of wall street experienced a similar downfall by losing 1,175 points which were the biggest one-day point loss. Similarly, S&P 500 experienced its first 10% decline in two years. Now, it has been revealed that there is a correlation between the cryptocurrency and stock market.

According to the DataTrek Research, the correlation has reached 30 percent which is the highest level that is ever seen. As the cryptocurrency market is growing, it has now the potential to affect the stocks like Nvidia. 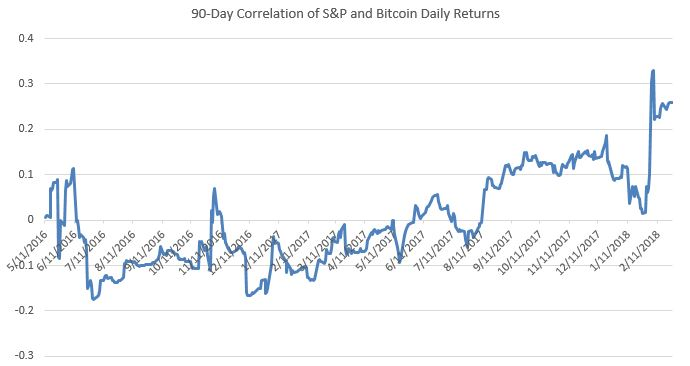 In addition, an interrelation can also be seen recently as the prices of Square stocks experienced a bullish trend in the light of bitcoin trading addition announcement. Being highly volatile, the crypto market can be used as an early indicator of changes in the risks that are reflected in the comparatively slower stock market.

During the last year, crypots increased in prices considerably along with its market cap that reached its all-time high at $800 billion. Similarly, the global market cap of stock added trillions experiencing a bullish trend.

The direction for both looks similar if we do not consider the speed of the rise and fall. One of the reasons for same is cryptos are now taken as an alternative to stocks, especially because of ICOs. Moreover, investors of both the industry are high-risk takers.

As for gold, that had an inverse relationship with bitcoin before, no longer seems to have much correlation with cryptocurrencies.

This correlation between the stock and cryptocurrency market has resulted in the stock market investors to pay attention to the trend of the crypto market to determine the stock trend.

As stated by the chief investment officer at Forester Capital Management:

“We do view bitcoin as a sentiment indicator.”

“We’ve begun to watch bitcoin more closely as a sign of speculative enthusiasm.”

The relationship is certainly there but how long will it last can only be determined over the time. Moreover, it also remains to be seen if the sentiments in stocks will reflect the sentiments in cryptocurrency market.

What are your views on the Cryptocurrency and stock market correlation? Let us know your thoughts below!

Facebook Twitter LinkedIn
Achal Arya
514 Articles
I am an entrepreneur and a writer with a bachelors degree in Computer Science. I manage the blockchain technology and crypto coverages at Coingape. follow me on Twitter at @arya_achal or reach out to me at achal[at]coingape.com.
advertisement