While a lot of people below cryptocurrencies could replace fiat money, these digital coins are still to stand the certain test of specific economic conditions. One such adverse situation is that of a recession when a business cycle contraction takes place which results in a general slowdown in economic activity.  According to a recent survey conducted by FundStrat, which covered some interesting views of people on cryptocurrencies, the majority of people and institutions believed that prices of cryptocurrencies would rise if there was a recession.

The survey considers two sets of responses for every question, one from the institutions and second from the general public by way of Twitter. When asked about the recession and the reaction of cryptocurrency prices to it, 72% of the institution said that prices of cryptocurrency would rise while 28% denied it. The same question yielded 5382 responses on twitter out of which 59% people said the believed the prices would rise. The report further stated that if twitter spread was subtracted from the institutional answers, the result should that Institutions were more confident prices rise in a recession…

To explain in a recession- according to definitions when there is two-quarter of negative growth in GDP- the prices of stocks tend to decline due to degrowth. This makes people switch their bets out of equities and move it to haven assets such as bonds and gold. Now with the emergence of cryptocurrencies, we have one more haven asset and hence many believe if there is recession people will start hoarding cryptocurrencies taking their prices higher.

The survey had some fabulous questions which captured the exact mindset of what people in general and institutions think about cryptos. Some of the interesting questions that were included in the survey included When and at what price bitcoin will bottom, what problems was ICE’s new venture Bakkt solving and what would be the ultimate consequence of US strict regulatory stance on cryptos? 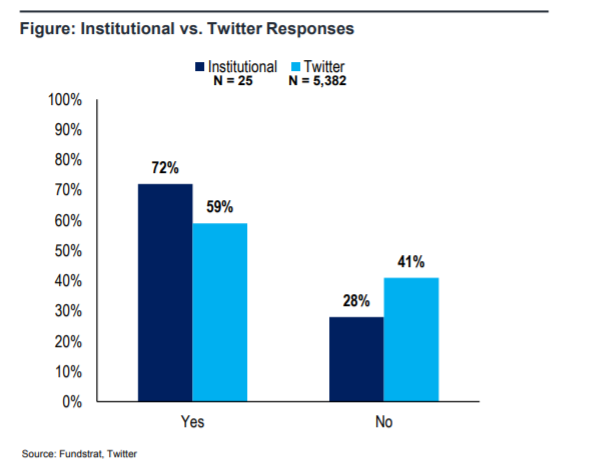 The final result and conclusions of the survey were:

CRYPTO POLL (2 of 6 questions):
Do you think Crypto prices rise in a recession?

Conclusion according to the report was

The FundStrat survey results have given some amazing outcomes and we will have to see how much of this actually turns out true. But if the conclusion is to believe BTC and XRP clearly stand out as best bets to buy

DO you think the views expressed in Fundstrat survey are correct? Do let us know your views on the same.