Following the major loss from Hacked Cryptopia crypto exchange, about 40 people trying to reclaim their funds, New Zealand media reported. Cryptopia is the first exchange to suffer hack crises in the year 2019. Following the incident, police have begun investigating the matter and the amount that has disappeared.

Clive Cousins who is the lawyer in Christchurch said that, in the year 2018, few investors reached out to him, inquiring the status of their funds on Cryptoia.

“We were contacted initially by about three people, including a South African lawyer, who were complaining that they were having trouble transacting using their wallets and couldn’t withdraw funds.”

He further adds that 40 plus individual again approached him to file a ‘joint lawsuit’ against hacked Cryptopia exchange.

Accordingly, on January 15, 2019, police have locked down Cryptopia’s Colombo St headquartered office and published an initial report on its official website. However, police examined the office yesterday but no comments from the company’s officials are available yet. Further, the police are doing its best and in talks with the relevant agencies to partner within the country and overseas as well. 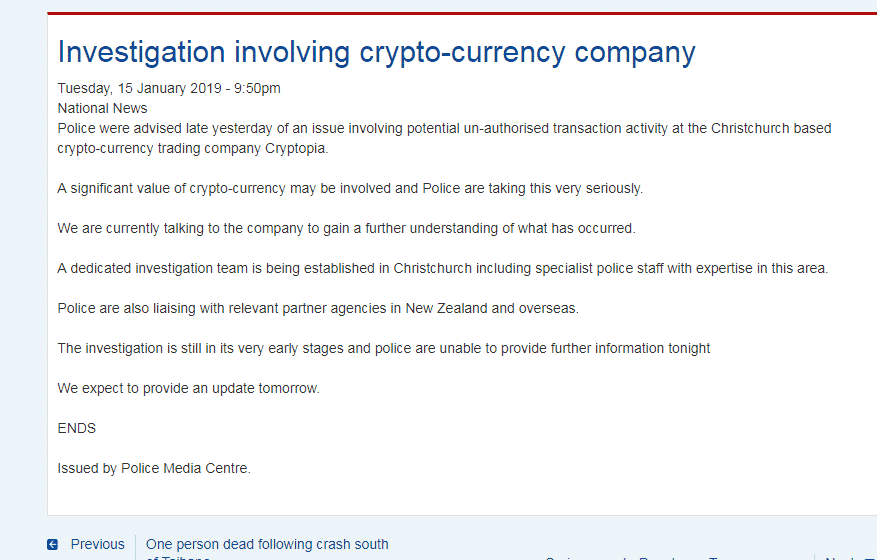 Following the investigation report, Cryptopia exchange informed its users on social media that the matter is ‘in the hands of authorities’, henceforth, they cannot discuss on the matter.

We cannot comment as this matter is now in the hands of the appropriate authorities. We will update you as soon as we can.https://t.co/9uMiKQwb6u

However, following the Cryptopia’s twitter update, many users voiced on their funds that are stuck due to hack incident. In fact, few of such users ask exchange to let them access to withdraw their funds. One of the twitter follower (username –AkihabaraPab) points ‘police action of taking fingerprints in its office. He says;

Meanwhile in New Zealand, Police are taking fingerprints in cryptopia's offices, showing publicly that they have fully understood what happened and are commited to finish the job 😀

Along with New Zealand police, Financial Markets Authority (FMA) is also investigating the breach report. Nevertheless, a spokesperson told that Cryptopia informed FMA on Wednesday morning and the police officers were informed late on Monday. While taking Cryptopia’s hack inquiry up, FMA says;

We will be engaging with the firm and the police.

Talking about the hack, cryptocurrency consultant, Josia Spackman blame ‘listing of unfamiliar or lesser known crypto assets on Cryptopia’ is the major cause of hack. As such, these coins are not as famous as the Bitcoin and other known cryptocurrencies. He further adds;

“Unfortunately, as a result, they’ve had these other coins disabled. So once you purchase them you basically can’t get them off the exchange.”

Although the hack of cryptocurrency exchange is not the first time in history, there have been many cases of such incidents including Japan’s Coincheck hack in early 2018. Josia Spackman further notes that;

“The problem is it’s easier to hack a computer than to physically walk into a bank and take gold and silver.”

Crypto Market Cap Falls Below $1.5 Trillion on a Red Weekend

Crypto Market Cap Falls Below $1.5 Trillion on a Red Weekend
The cryptocurrency market cap fell below $1.5 trillion on a…

Shirtum: The Best Blockchain Platform for Soccer Enthusiasts
Soccer/football is currently the most popular sport, with over 3.3…

Indian Crypto Exchange WazirX at the Center of an Alleged $38M Money Laundering Investigation
WazirX, the top crypto India exchange is at the center…
Tabassum 562 Articles
Tabassum is a full-time content writer at Coingape. Her passion lies in writing and delivering apt information to users. Currently, she does not hold any form of cryptocurrencies. Follow her on Twitter at @Tabassumnaiz and reach out to her at Tabassum[at]coingape.com
Follow Tabassum @
Twitter