The EOS blockchain arbitrator has ordered the Block Producers to freeze 27 accounts without any explanation. In its latest notice, ECAF provides the clarification for the same stating that it has received claims from individuals for those accounts that led them to take this step.

The whole EOS account freezing debacle has taken another twist as the arbitrator of the blockchain revised the number of accounts from 7 in the beginning to about 27 in its latest notice.

The ECAF Arbitrator Order which is an emergency measure of the protection order to the Block Producers (BP) provides a list of 27 addresses. It gives clear orders to the BPs that they are to refuse to process transactions for the listed addresses and keys for an indefinite amount of period. Or until the ECAF provides any further instructions or notice. 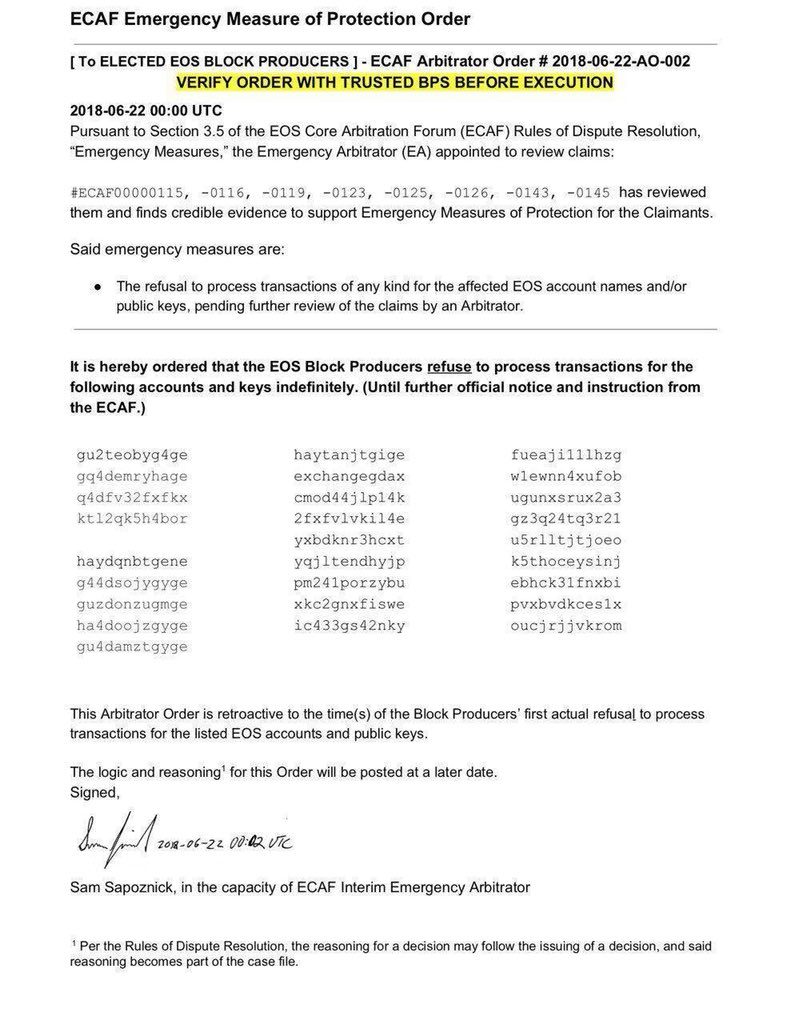 However, the order didn’t provide any details in this notice and said such that the logic and reasoning for the order will come at a later date. This certainly received mixed responses from the people and became a topic of debate.

“What’s funny about that? Those are probably accounts with stolen coins in them. BP Managers don’t have to explain themselves to you for each and every little action they take. This level of transparency is still mind-blowing. It’s awesome.”

Also, read: EOS Adds Another Feather To Its Cap, Rated Best Blockchain By The Chinese Government

In a separate document, the ECAF provides the reasoning behind the actions taken on June 19 and June 22. It further claims that the reasoning applies to every account listed in the order and “to every related ECAF Claim”.

The accounts were listed for the freezing in accordance to “formal claims submitted by individuals (i.e. People) to the EOS Core Arbitration Forum”. 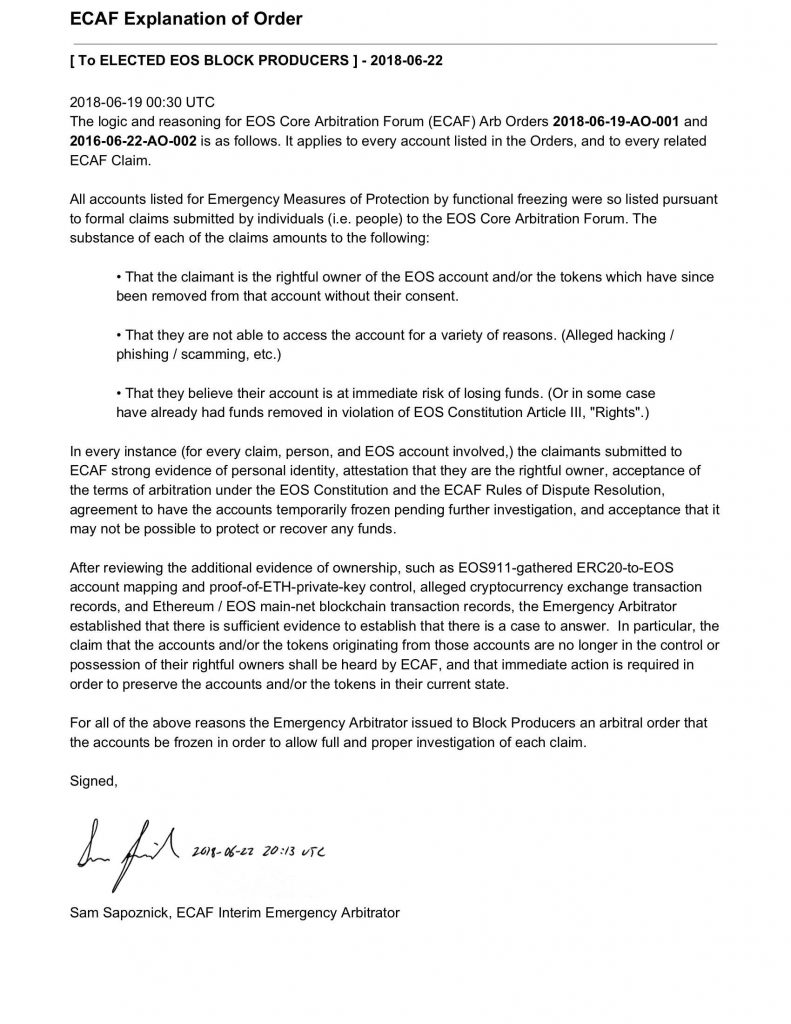 Reportedly, the claims amount that the claimant is the rightful owner of the account from which the tokens have been removed without their consent. Another claim is that they are unable to access the account for a number of reasons like alleged scamming or hacking. Also, they believe that their account is in danger of losing the funds or have already been removed in violation of the EOS constitution.

The order also states that the claimants have provided “strong evidence” of personal identity along with other attestations and agreements. Hence, the document concludes that they have ordered the Block Producers to freeze the accounts so that proper investigation of each claim can be conducted.

However, people still have their doubts as one Redditor asks,

“Can anyone explain how it could be proven that the account holders themselves did not move their tokens and then ask fraudulently to get them back?”

“What I took away from this is that the victims sent a signed transaction from their Eth address that is mapped with their Eos address. Correct me if I’m wrong. So my question is, what if this happens in the future where new accounts are created and they won’t have an Eth address mapped with it? How is verification going to take place?”

The concept of Block Producers is something that EOS has introduced which is yet to be understood how it will all work. With the Arbitrators in the mix, the situation surely gets complicated. For now, it’s to be seen what does the investigation will conclude and the further decision to be taken for the frozen accounts.

What are your views on the order to freeze the accounts? Are you satisfied with ECAF’s explanation for the same? Share your thoughts with us!