It hasn’t been long since EOS mainnet activation and its governance is having some serious issues already. The latest development is EOS founder Dan Larimer’s proposal to throw away the constitution and start a new which is bringing forth its own set of questions.

The EOS constitution and governance is only going haywire with new developments every other day. Soon after arbitrator’s order to freeze about 27 accounts, the personal conversation between two Block Producers surfaced. This raised the question of one BP controlling the majority of them, pointing another finger at its centralized nature.

Now, Daniel Larimer, the founder of EOS and CTO of Block.One, the company behind EOS, has jumped into the fray and is planning to scrap the constitution altogether and start anew as said by him,

“I’ve got new const to propose that I believe will get full support.”

He also talked about limiting the scope of governance and arbitration. As for the accounts freeze, he shared:

“My official opinion on disputes regarding stolen keys is that no action should be taken. The producers should campaign on using some of their pay for donation to make the victim whole.”

However, Daniel’s proposition for a new constitution is not met will all applauds as a Technologist, Gabriel Shapiro Tweets, 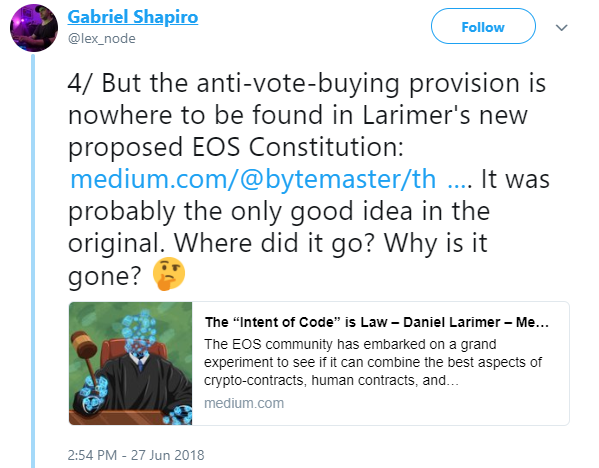 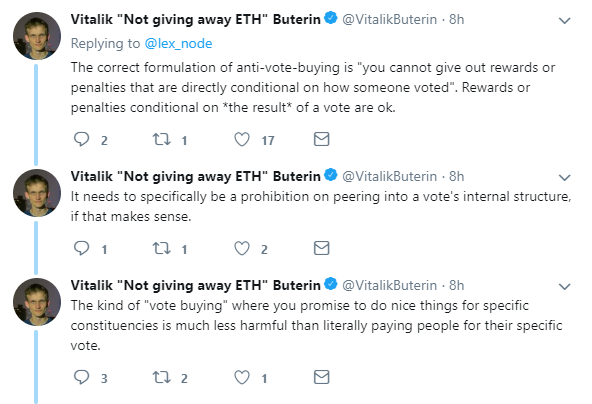 Also, read: Is EOS Threatening Block Producers for “Not Complying” with ECAF Order?

Daniel Larimer also shared a “The “Intent of Code” is Law” blog where he talks about it in great detail.

“We have seen that if you give people arbitrary power to resolve arbitrary disputes then everything becomes a dispute and the decisions made are arbitrary. The more power the arbiter has, the more vicious and petty the disputes become and the less predictable the outcome”

On lost and stolen keys, he shares,

“each member of the community is responsible for their own security and permissions configuration. Enabling a fall-back to arbitration to dispute the validity of a signature after it has been irreversibly accepted by the blockchain opens up more issues than it solves.”

As for the Article V, Daniel further clarifies,

“No Party shall have a fiduciary responsibility to support the value of the EOS token.” He then adds, “This blockchain shall have no owners, managers or fiduciaries.”

Daniel concluded his blog with,

“This Constitution shall be amended by a vote of the EOS token holders that attracts no less than 15% staked vote participation among tokens and no fewer than 10% more Yes votes than No votes, sustained for 30 continuous days within a 120 day period.”

Though the crypto world has been sharing their perspectives with the ongoing controversy around EOS’s governance, you can’t unsee the other side of the situation as presented by the Weiss Ratings.

It is yet to be seen in which direction EOS community will go. However, given the time it took the first time for the voting procedure to activate the EOS mainnet, if the community decides to amend the constitution, it will be interesting to see if it would be an active process because of the current situation or will it again lag behind.

What do you think of Dan’s new proposition for EOS Constitution? Share your thoughts with us!