According to the crypto prediction report by Finder, EOS will see the highest growth at 206% which will be followed by Tron and Cardano. VeChain and NEO also makes it to the top 5 while bitcoin is expected to rise about 99 percent by the end of this year.

The top spots are acquired by EOS, Tron, and Cardano. VeChain and NEO might not have been able to make it to the top 3 but definitely comes under the 5.

By bagging the first spot, EOS will be registering the highest price increase in this month of 44 percent as well as by the end of this year i.e. of 206 percent at $38.25. One of the panelists said,

“This may have the most potential among the Top 10. They will be switching over to their own network in early June, and that’s when we will see if this has legs. I think it will. At Consensus this year, people spoke about this the most.”

“I’m still trying to figure out their long-term plan. Based on what I’m seeing, they have potential but are still getting their legs” said one of the panelists.

EOS and Tron are closely followed by Cardano which will go $0.508 and have 145 percent expected rise in its prices. One of the members on the panel states,

“I like what they are doing here (which I would, in the interest of full disclosure, given our implementation of Knish/KniChain). And as more of the promised features become available, the easier it becomes to imagine it standing on its own merit, rather than completely having its fortunes tied to that of bitcoin.”

VeChain is expected to make significant gains by reaching $8 with a rise of 129 percent by year-end. With 98 percent rise in its prices, NEO will cross the $100 mark.

Bitcoin has been the subject of various predictions that have risen to as high as $1 million. However, with the recent fluctuations in the market, price predictions have taken a dip as well.

According to the Finder predictions, Bitcoin will be $8,487 by this month end and will rise 95 percent while reaching $14,638 at the end of this year. The panel further predicts that bitcoin will be seeing the highest increase in the market cap. 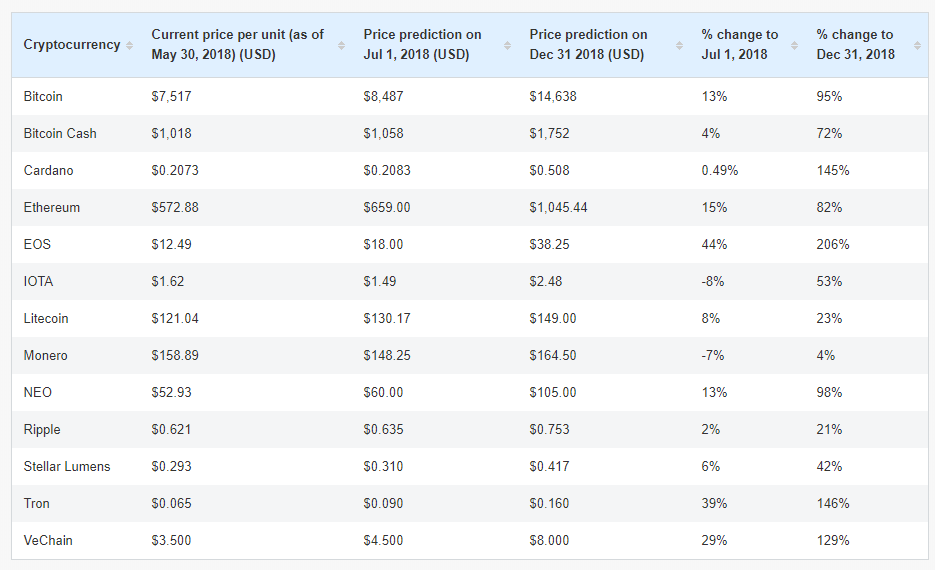 Ethereum will follow Bitcoin with 91% increase while Bitcoin Cash is expected to go up by 76 percent.

These expert forecasts do bring a hope back in the crypto market after a severe drop. With the way the market is currently running in green, it is expected that these price values might just realize. However, for now, we can only wait and watch.

Do you think EOS, Tron, and Cardano will soon rule the market? Share your thoughts with us!

Article Name
EOS, Tron & Cardano Tops the Crypto Prediction Chart with Over 140% Rise
Description
According to the cryptocurrency prediction report by Finder, EOS will see the highest growth at 206% which will be followed by Tron and Cardano.
Author
ANJALI TYAGI
Publisher Name
COINGAPE
Publisher Logo