Ethereum is all set to have a Constantinople Hard Fork between January 14-18, 2019. Since the major announcement appears on bulletins, Ethereum which was standing on the third largest position from Mid November 2018 has reclaimed its position this year. Consequently, at the time of writing, Ethereum is the second largest cryptocurrency with the total market capitalization of $16,442,161,966 USD.

The Constantinople Hard Fork was publicized in early December 2018 in a bi-weekly meeting by Ethereum’s developer. Following this, the hard fork received huge support from the community including trading platforms like OKEx, Binance, Huobi cryptocurrency exchange as well as individual members in a crypto space.

Binance with more than $1 billion trading volume per day is supporting the Ethereum’s upcoming Constantinople hard fork. By addressing Ether holders, the blog reads it as follows; 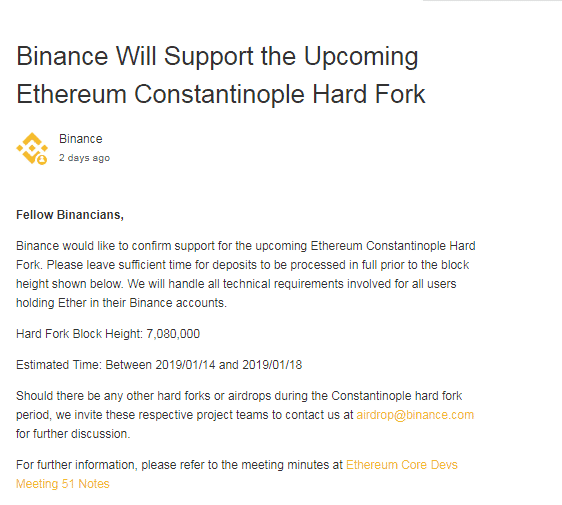 Beside Binance, OKEx, one of the largest cryptocurrency exchange has also announced to support ETH’s Constantinople hard fork. OKEx assures to ‘handle all the technical requirements of the hard fork’.

Huobi Exchange is also following the footstep of OKEx and Binance. It advises clients to have their Eth funds deposited into Huobi Global and expects the hard fork at block height 7,080,000. The team further guarantees that they look out for possible technical issues.

It’s an upgrade for Ethereum, no coin until community on the same page

Nevertheless, with the support, there are critics too. Ethereum had a hard fork in 2016 which has resulted into Ethereum classic and Ethereum – due to the fact that the developers were not being happy with security constraints of it. However, the case of this fork is different than what has happened in 2016.

As revealed, the fork will bring Five improvement protocols (Ethereum Improvement Proposals) into Ethereum’s blockchain wherein four of which are focusing on short-term scaling and aims to shift from proof-of-work (PoW) to the more energy efficient poof-of-stake (PoS) consensus algorithm.

It’s more about upgrades or EIPs that developers feel to implement. Since the upgrade is significant, it requires ‘a hard fork’. As such, it is important to note that whenever there is a fork of currency, there would be a new coin produced but since the Constantinople is an upgrade, a split is not a very probable outcome. Similarly, Mati Greenspan, eToro’s senior market analysts remarks and expects to have a smooth upgrade.

The coming Ethereum hard fork is not a split it's an upgrade. Unless some big player decides they don't like the upgrade, there will be no new coins produced.

Constantinople will make Ethereum cheaper & faster and will decrease the reward for mining a block from 3 ETH to 2 ETH.

What do you think of upcoming Ether’s Constantinople hard fork? How will it affect the prices? Let us know in your comments.