Ethereum had been relatively calm for a while now. It was seen trading below the $200 mark for several days even trading as low as $176.50 about a week ago. In the meanwhile, bitcoin too kept perambulating around the $10k USD mark while swinging between $9980 and $10442.

ETH has kept a bullish rally for about 48 hours moving towards the $200 mark. At the time of writing this piece, ETH had crossed $200 and is now trading at $201. By crossing the $200-mark, ETH has established a new 7-day ATH. The top altcoin still shows strong bullish movement possibilities as it has maintained this upward movement for more than 2 days now. 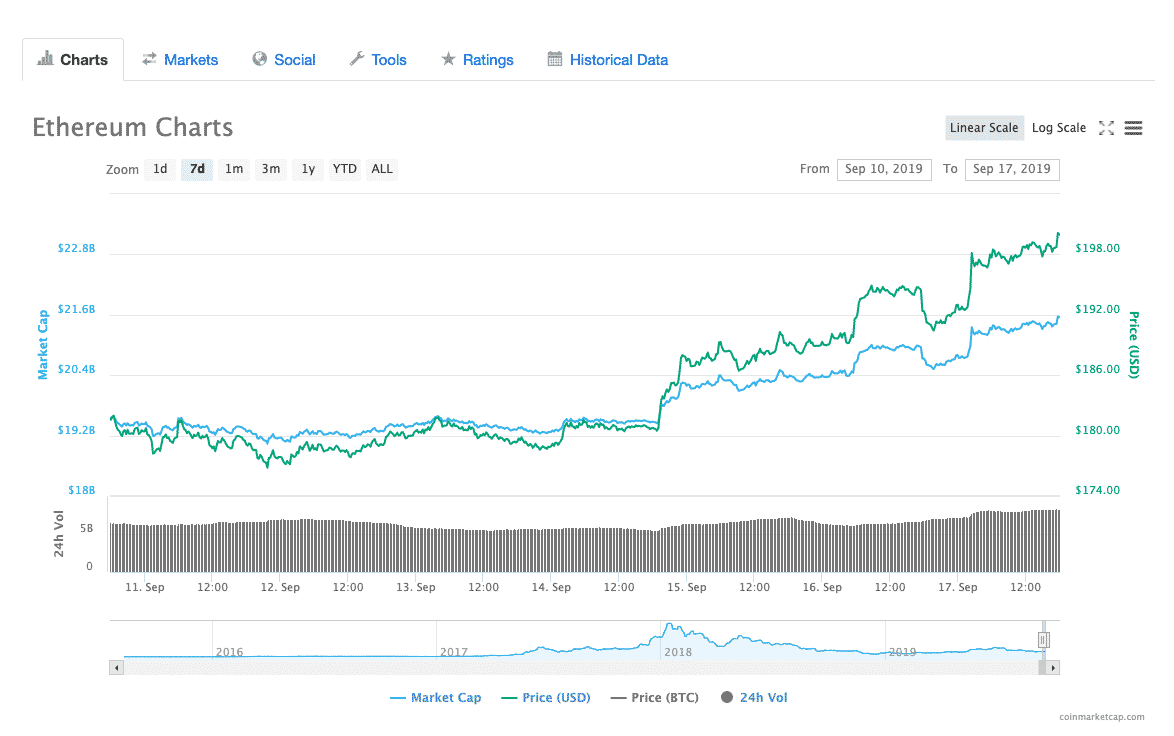 Trading at $200.4, ETH remains the second-largest cryptocurrency, only surpassed by bitcoin in terms of market capitalization and adjusted traded volume. Its coin dominance fell drastically towards 6.5% from its initial level at 8% though. At present, ETH has a market capitalization of $21.46 billion and a 24-hour trading volume of $8.33 billion.

Ethereum Within The Last 7 Days

Last Tuesday, on September 10, Ethereum was trading around the $180 mark. On September 11. it touched a low of $176.50, but bounced back again and was trading above $180 again the next day. The resistance at $180 proved a bit difficult to scale through, but ETH surpassed the level and perambulated within the $178 to $182 over the next couple of days. On September 14, ETH became aggressively bullish and closed at $188. It continued its upward movement on September 15, hitting $190 and on September 16, it touched $198 before closing at $197.

Analysts are showing optimism about the price of Ethereum. Quite a few technical and market analysis have been put forward by various traders and analysts to support Ethereum’s bullish case. According to a trader who goes by the name of Escobar, it is indicative of the beginning of the altseason. He tweeted,

Also, Zhoran trader who has set up swing targets at $220 tweeted,