Earlier today, Ethereum fell roughly 10 percent from yesterday’s high of $118 to about $104 where it is currently hovering. The 10.12 percent loss becomes the cryptocurrency’s largest single-day percentage drop since January 10, surpassing even the 6 percent drop recorded when the planned Constantinople hard fork scheduled for January 16 was postponed due to a security vulnerability discovered late on.

With the drop, Ethereum’s total market cap falls to $11.04 billion where it still remains ahead of its nearest challenger TRON. This becomes the latest significant downward move by Ethereum after a year that has seen it fall over 92 percent from $1,423 and all time high market cap of $135.58 billion, driven by reduced interest in ICOs and competition for TRON and EOS in addition to bearish crypto market conditions. 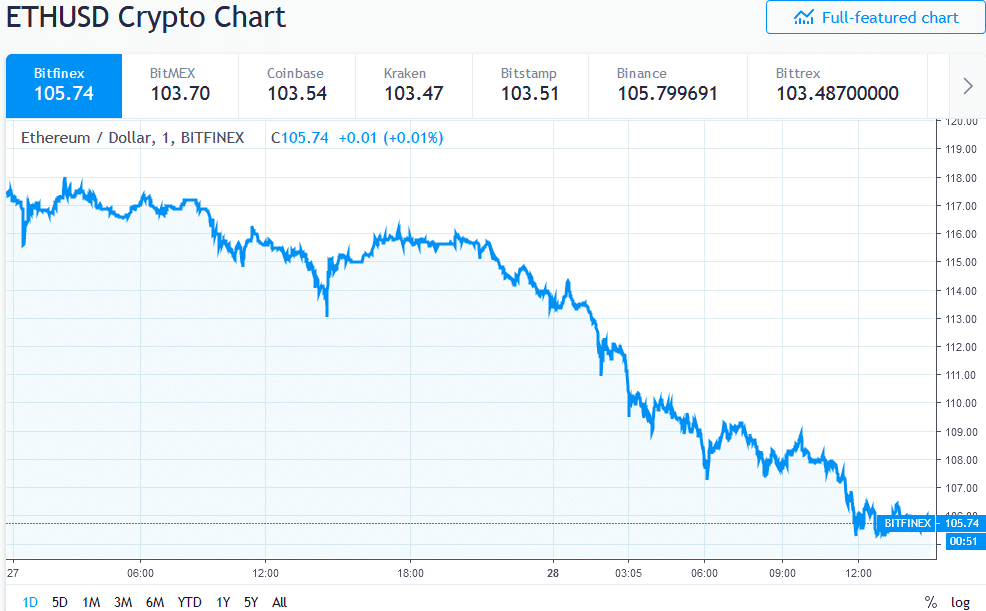 The bearishness was not restricted to Ethereum as most of the other major cryptocurrencies got in on the downward movement action, including bitcoin which lost 3.73 percent, XRP which lost 7.02% and bitcoin cash which lost 3%.

It will be recalled that ever since the botched Constantinople hard fork which was postponed because of a smart contract vulnerability, Ethereum has been taking a bit of a beating in the market. Coingape reported on January 16 following the botched hard fork that Ethereum was flashing a sell signal, losing more than 6 percent on the day.

The bearishness has persisted in the intervening two weeks, with the past week, in particular, witnessing a 10 percent price drop. Despite this, Ethereum continues performing at around its usual volumes, which is perhaps a sign that the market is not reading much of a long term downtrend into its current movement.

At press time, the 24-hour trading volume of Ethereum was $3 billion, or approximately one-sixth of the entire crypto market, which is only second to bitcoin with $60.64 billion (53.5 percent). XRP continues to keep the pressure up on Ethereum, coming in third with a total market cap of $12.08 billion, which comes up to 10 percent of the value of the crypto market.

Coingape reported recently that increased competition from TRON due to the growing popularity of DApps built on the TRON protocol is hurting Ethereum, which is currently in a close race with TRON to maintain its number two spot on the cryptocurrency rankings.

Overall, ETH/USD is struggling to stay above the $105.00 support, which could increase a lot of pressure on Ethereum buyers in the near term.