The current rally driven by the news of Bitcoin Cash Fork and the support it receiving from major crypto exchanges and in anticipation of the free coins that would be available once the fork happens.

BCH Hardfork, all that glitters is not gold

This week, despite rest of the market being in a slumber mood, Bitcoin cash saw a stellar run of over 25%. This was on the back of the news that major crypto exchanges would be supporting the new fork of BCH which is scheduled to arrive on November 15 2018. Traders and investors are buying BCH in anticipation of an additional coin that would come out by forking the current BCH network. But here comes a note of caution.

The scenario around BCH fork has gained certain negative sentiments because of the standoff between Craig White, the chief scientist at blockchain research firm nChain and Bitmain’s Jihan Wu, the co-founder of Bitmain due to some fundamental differences regarding the fork. Also no one knows how the fork is going to playout. If this fork plays out well then, the hypothesis of buying BCH now would earn profits for the traders and investors but if something goes wrong, then these pieces of token would be rendered worthless and BCH prices too could come down crashing creating a double whammy for the investors and traders who are in a hodl mode right now. So it’s a buyer beware rally.

BTC prices less than mining costs, are we going to see a BTC rally soon

Moving on from BCH to BTC, according to an analysis with respect to mining cost and hash rates, the prices of the Bitcoin seems to be below the actual cost of mining. According to the calculation that had surfaced way back in June this year showed that the price to mine a single Bitcoin was close to USD 6900.  While the hash rate of Bitcoin has increased a bit, which signifies increase in mining activity, it could be assumed that the current mining cost could be close to USD 8000 to USD 9000 depending on the operator.

Under this scenario, it can be assumed that most mining outfits around the world would be incurring a loss. This shows that the miners still have confidence that bitcoin prices would go up. Also with respect to the prices, it is fairly clear that hash rates are very closely related to bitcoin prices and in the previous bear markets these hash rates have stalled for the price to catchup. 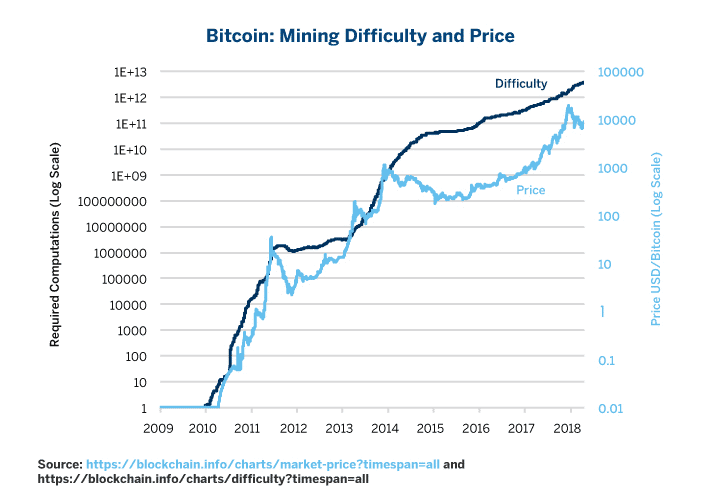 However the case has been different this time and despite the bear market the hash rates have continued to skyrocketed. SO if the previous trends regarding the correlation stands true, we me be due for a strong rally.

advertisement
✓ Share:
Disclaimer
The presented content may include the personal opinion of the author and is subject to market condition. Do your market research before investing in cryptocurrencies. The author or the publication does not hold any responsibility for your personal financial loss.
About Author
Mati Greenspan
Mati Greenspan is the Senior Market Analyst at eToro, a global social trading and investment platform. Mati is a licensed portfolio manager in the European Union and his main focus is on macroeconomic analysis, portfolio diversification and cryptocurrencies. Follow him on Twitter at @matigreenspan

Twitter LinkedIn
Mati Greenspan
45 Articles
Mati Greenspan is the Senior Market Analyst at eToro, a global social trading and investment platform. Mati is a licensed portfolio manager in the European Union and his main focus is on macroeconomic analysis, portfolio diversification and cryptocurrencies. Follow him on Twitter at @matigreenspan