Note: “This analysis is an adaptation from the work of Mati Greenspan, Senior Market Analyst at eToro.

While the dropping crypto prices have impacted the miners and yes some of them have been forced to close their shops as they would withstand the pressure, but the extent to which this is highlighted on social media is far from real.

The social media currently is full of FUD and rumors as a lot of users are recycling older images, most of which were released in July during floods, to portray the current scenario of Chinese crypto mining rigs and connecting to the latest meltdown in crypto markets. The following picture is one of them 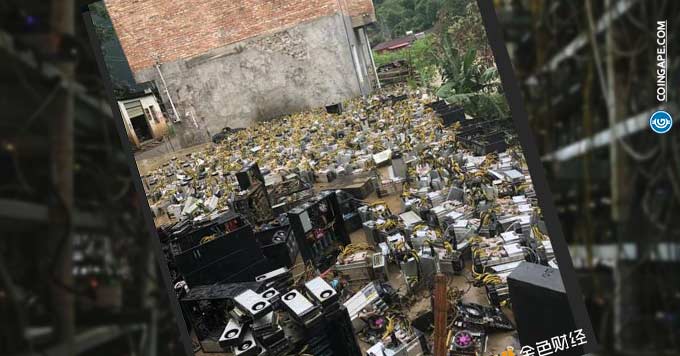 Due to the last year rise in crypto prices, a lot of people have entered the industry over the past 1 year and it’s really difficult for them to differentiate into what is a real news and what is a rumor creating needless panic in the markets. Although in a way, this is a healthy part of the bitcoin cycle, where everyone who got involved a year ago is now learning as much as they can about crypto. During the next surge, they will be the experts.

But Bitcoin’s hash rate dipping, that’s not FUD. Right, but here’s what it means.

Bitcoin’s hash rate has indeed dropped in the last few weeks but this is not at all concerning. It’s actually comforting as the rate has risen so sharply over the course of the year and is now returning to normalized levels.

Also, it should be noted that the hashrate doesn’t directly influence supply or demand. Each bitcoin block is still created about every 10 minutes, creating exactly 12.5 new BTC for the miner who creates it. If there’s less hash, it will simply make it easier for the ones who are left to find the blocks.

Do you see a FUD going around you about cryptos. Let us know on comments.