Genesis Trading, a popular crypto trading, and lending platform sent out a cautionary email to its customers informing them that they are halting XRP trading and lending services owing to the SEC security lawsuit against Ripple and two of its executives. The trading platform informed the customers on its platform that they have suspended all XRP trading services while they would have until January 15 to sell their XRP holding if there is enough liquidity for the token. 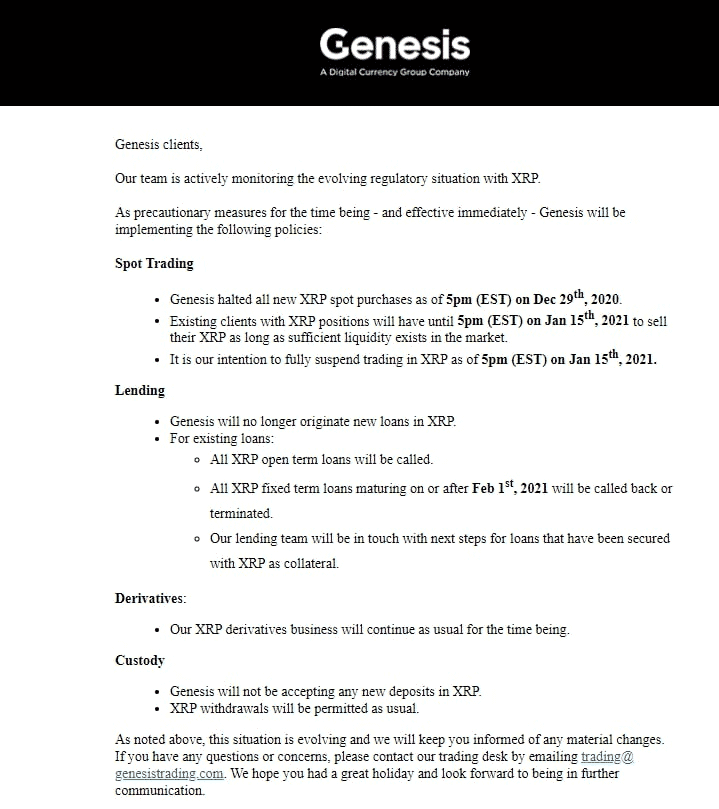 Genesis joined the growing list of crypto platforms to delist all XRP  related services from their platform owing to XRP’s security accusations. Yesterday Coinbase, OKCoin, and Bittrex announced the delisting of the XRP token.

XRP price took a massive hit post-security accusations and lawsuit filed by the SEC against its parent company Ripple Labs and two of its executive. XRP lost its long-held third spot to Tether and later Litecoin flipped it for the fourth spot. The SEC vs Ripple lawsuit is set to begin the court proceedings with a conference on February 22. However, more than 10 crypto platforms have already delisted XRP from its platform fearing the SEC crackdown.

XRP token has already lost 80% of its market cap within a week of the lawsuit and as more exchanges continue to delist the token, it is becoming nearly untradable. Many fear that XRP would soon lose liquidity due to mass delisting and become non-existent irrespective of the outcome of the lawsuit.

Ripple in its defense has claimed that SEC’s action would bring unwanted troubles for hundreds of its investors and called for unity among the crypto community. While a few crypto exchanges and partners such as SBI Holdings extended their support to the crypto community, many bitcoin proponents who have been warning against Ripple’s pump and dump of XRP felt validated that their claims have come true.

I’ve not seen a chart like this in crypto before. https://t.co/x0nEZPjJUp pic.twitter.com/VknnIbFSIA