With global and US debt crossing all of their records and global stock markets getting ready for the collapse, China is all set with its contingency plan by acquiring massive amounts of gold and already making their way to Bitcoin, crypto and Blockchain technology.

“Blessed are the young, for they shall inherit the national debt.”—Herbert Hoover, U.S. president 1929–1932

The elephant in the room is Debt.

The first time in the history the global debt is at an estimated $245 trillion which is also $100 trillion higher than it was during the recession of 2008. From government, banks, corporates to consumer debt, they all are a fact now.

As for the US debt, it is also on a constant surge. During the Obama administration, the national debt rose $9.3 trillion while the last year saw the rise of about $1,000 billion. 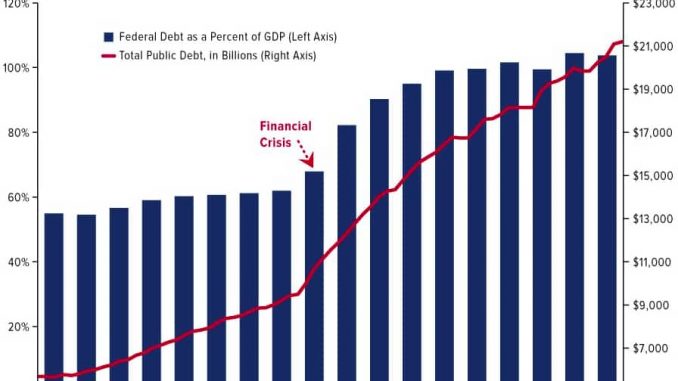 According to reports, the US investment-grade issuance had taken a hit of 34 percent from September while last month triggered a massive rout in the global stock market. Corporate bond price has declined while companies find it hard to issue new debt with credit market being affected due to volatility in the global stocks.

Recently, an analysis has been released, that said, “By the time a child born in 2018 reaches retirement age, the United States national debt will be six times the size of the economy.”

The Committee for a Responsible Federal Budget (CRFB) also revealed in its 75-year budget forecast, “While today’s high levels of debt already threaten to slow economic growth, there is literally no precedent for deficits and debt at the levels projected over the next 75 years.”

It has been further added, “If policymakers don’t act to avoid such high levels of debt, a financial or inflation crisis would likely force action and severely damage the global economy in the process.”

Meanwhile, China Gets it All & Already Preparing for Contingency

Apparently, Chinese know what is happening and they are taking action! According to the mainstream reports, China has taken a massive delivery of gold from London and New York.

Egon von Greyerz, the founder and managing partner of Matterhorn Asset Management (MAM), a private investment company whose global clientele invests in physical gold and silver has been quoted as saying:

“They’re all into gold. Absolutely. Yes, virtually all of them own gold. That’s what’s so interesting.  The Chinese buying is continuously going up and up and up without stopping. The Chinese know what is happening. They know it and they will continue to buy gold. And one day that’s going to have a major influence on the gold price.”

Greyerz further adds, “All they have — these central banks — who have probably leased most of their gold, all they have is an IOU from a bullion bank and that bullion banks is never going to get the physical gold back. That’s another massive shortage that’s created an enormous imbalance in the gold market and when the whole thing blows up it’s going to put enormous upward pressure on the gold price. That day is coming…”

When it comes to crypto market, as we recently reported China doesn’t ban the owning or transferring of bitcoin as the court rules that Bitcoin is protected by law as property.

Moreover, as put by crypto enthusiasts and experts,

#China is steadily warming up to crypto: Businesses are now allowed to receive payments in #BTC while individuals can hold and transact the asset. These are positive signs that China could open the #crypto markets soon. This will have a major impact on adoption worldwide.

US Empire now pays half a trillion dollars in interest payments per year to service its debt.

US debt increases by a trillion per year. It’s a death spiral that cannot be undone.

Self destruction and USD collapse are unavoidable. Get out of USD and US stocks. Buy gold & crypto.

Not to forget the fact that last in last week, Bitcoin showed more stability than the traditional stock market.

Bitcoin and crypto have become a global phenomenon that is expected to go mainstream especially as the global debt and stock markets launch into a disaster.