Goldman and Bank of America report the growing fiscal gap in the US to boost gold prices. Moreover, the impending US dollar crisis further brings out the experts’ bullish views on gold. Now, what could it mean for Bitcoin, the digital gold?

BoA & Goldman: Gold to soar in the coming year

Gold has always been seen as the best alternative investment option and hedge against the losses during the time of crisis. With the fiscal gap keeps on growing bigger and the impending US dollar crisis, gold is expected by the experts to take a surge in the coming times.

According to Bank of America Merrill Lynch, Gold prices will soar over the course of next year. This is due to the rising concerns over US budget deficit and the country’s trade war with China that keeps on getting worse. 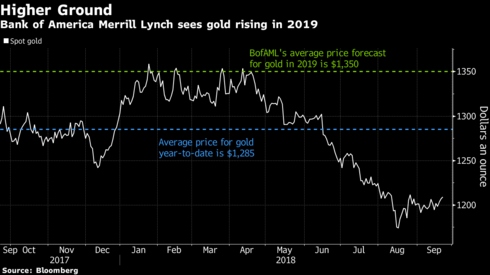 “In the short run, the effects of a strong dollar, higher rates dominate. But in the long run, a huge U.S. government budget deficit is pretty positive for gold.”

Ray Dalio, the owner of the world’s largest hedge fund has already predicted and warned of the downturn of US economy in about two years.

The US administration’s tax cuts along with new federal spending will take the budget deficit to $1 trillion in 2020, as per the Congressional Budget Office forecast.

As for the trade war, Blanch stated,

Recently, Galaxy Digital founder and CEO, Mike Novogratz pointed out Bitcoin being the digital gold and as the millennials turn older they will be moving towards the digital asset while further adding,

According to him, “There’s an institutional FOMO going on all of a sudden.” And not just this, eventually it would become a part of the financial portfolios of the people, shared Novogratz before adding,

“As you start getting custody and service providers in and around the system, it allows pension funds and endowments to get involved.”

Bitcoin has been increasingly seen as the digital gold and a store of value. Now, even more so as Bitcoin volatility is slowly getting down. Moreover, the world’s leading cryptocurrency surely holds a potential alternative option for the millennials. So, it is expected in the coming years as bitcoin halvening approaches and global debt and currency crises hit on, Bitcoin would get a boost just like gold is expected to surge.

Facebook Twitter LinkedIn
Abhinav Agarwal
141 Articles
A blockchain enthusiast, my expertise extends to marketing and advertising through which I was able to help a few notable startups in generating initial traction. Follow me on Twitter at @abhinavagrwl94 and reach out to me at abhinav[at]coingape.com
advertisement