ZCoin founder Poramin Insom has revealed that government-backed hackers may be attempting to compromise his email account, in what some say is possible pushback from the Thai government over his involvement in one of the regime’s most humiliating climb-downs in recent times.

Posting on his Facebook profile on Friday morning, Insom displayed a screenshot of a security notice from Google warning him that government-sanctioned hackers are making attempts to hack his email. 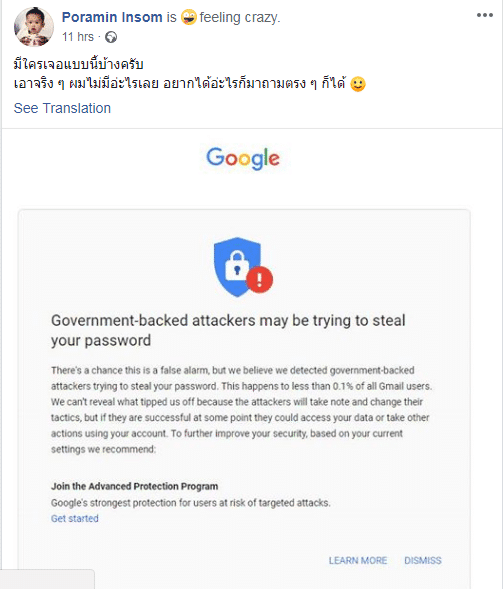 Thailand is one of the least forgiving jurisdictions for dissent, ruled by a powerful royal family and a military junta that seized power in a 2014 coup. Political activists and dissidents who dare to speak up often end up prosecuted under the country’s strict anti-dissent laws and censorship is a recurrent complaint by Thai activists.

In 2018, a Thai rap collective is known as “Rap Against Dictatorship” released an eponymous single that excoriated Thai authorities, using hip-hop’s raw, earthy medium to express dissatisfaction with government corruption, official high-handedness, censorship, and poor infrastructure. The video quickly went viral on YouTube, amassing more than 30 million views in less than two weeks much to the regime’s chagrin.

The country’s deputy national police chief Srivara Ransibrahmanakul quickly came out with a statement implying that the artists behind ‘Rap Against Dictatorship’ could be prosecuted for sedition. There were also whispers about the Thai junta leaning on Google to take the video off YouTube, and this is where the story got interesting from Insom’s point of view.

Using an IPFS link embedded in a ZCoin transaction, an unknown individual saved an indelible copy of “Rap Against Dictatorship” on the ZCoin blockchain – an action that made headlines around the world because, for the first time, the Thai government was genuinely rendered powerless to enforce censorship. As the founder of ZCoin, which is based on the Zerocoin protocol (different from the Zerocash protocol), Insom inevitably became a person of attention to Thai authorities.

In 2012, Google instituted a new warning system to alert users of apparent attempts to compromise their Google accounts by state-backed entities. In the announcement blog post, Google stated that while the new warning does not necessarily mean that the targeted account has been hijacked, it does signify that a significant government-backed attempt has been made, and the affected user should apply countermeasures such as changing their password immediately.

An excerpt from Google’s statement reads:

“You might ask how we know this activity is state-sponsored. We can’t go into the details without giving away information that would be helpful to these bad actors, but our detailed analysis—as well as victim reports—strongly suggest the involvement of states or groups that are state-sponsored.”