The premise that cryptocurrencies will rise in the future is hugely based on the fact that these tiny bits of innovation will find real-life use cases. While many of the ICO’s and tokens that took birth in the rise of 2017 faded away because they did not have a use case. If one has to separate the men from the boys in the crypto industry depending on their use cases, Ripple’s XRP will definitely top the man’s list. The company, Ripple, has taken every step to connect the traditional world of business to the future world of decentralization and cryptocurrencies and that too by the nerve of businesses- finance and banking.

You might find this article interesting: Future of Ethereum: Is It Dead, Or Will It Rise?

While XRP looks the most promising crypto coin, it has a set of issues where it trying to prove itself to be true decentralized coin. This is what is keeping a lot of investors away as XRP finds itself in really tricky zone whether the coin will actually rise like a phoenix or will burn to ashes because of its certain “security” and not do “decentralized” features.

What is Ripple and its coin XRP?

Ripple as a company was founded in 2012 with its set goals and investors. While in its initial year the coin was compared to Bitcoin, but slowly the world saw differentiation coming. While there are other hosts of reasons the key differentiator was that, bitcoin worked using mining (proof-of-work) while Ripple, on the other hand, used an iterative consensus ledger and validating servers’ network along with XRP cryptocurrency tokens.

The main idea of Ripple was to create a system of direct asset transfers in real-time which would be cheaper, more transparent, and secure than the existing payment methods, such as SWIFT payments. Today, the Ripple company had offices in Australia, Luxembourg, and the UK and good enough banking partners to which it could provide an experience to transact globally without any friction and in a completely secure manner using blockchain. By joining hands with Ripple’s growing network, banks and other financial institutions now have the much-needed prowess to process their customers’ payments anywhere across the globe at the snap of their fingers in the most reliable and cost-effective manner.

With much of the positives in its favor, there have been several upside predictions on XRP.

Roman Guelfi, a renowned crypto enthusiast has put forward his thought that 2019 is the year for Ripple and the company and its coin will achieve bigger milestones. According to him as the market starts seeing huge projects waiting to be executed, most of the front running cryptocurrencies will eventually take a backseat and XRP market will rule the roost here because of its real-life applications.

And it’s not just Roman Guelfi, other sources to are super optimistic of XRP’s rise. According to the prediction of Oracle Times, which recently mentioned in one of their articles, XRP may see a huge surge as much as 2000%, the premise being the Ripple has every element which could help it become the best choice for cross-border payments by financial institutions. According to them, Ripple is all set to capture the pole position in the cross-border payments industry which is predicted to be as large as $9.8 trillion.

While invariable Ripple with its blockchain and XRP can change lives for the banking system, it has some problems of its own to deal with. Hence drawing an over-optimistic conclusion with respect to price is slightly trickier this state.

Hence we tried to put together relevant “pullers” and “pushers” of the price for XRP.

Pullers That Will Pull XRP Up

RippleNet is a mesh-like network which is completely decentralized and based on an agreement between Ripple and the other network participants. This participants also utilize the same technology as Ripple and follow a fairly consistent set of rules and standards for payments. By being on RippleNet, Banks across the globe can experience single, frictionless experience for global payments. Banks and other financial institutions also stand to benefit from the dynamic and robust connectivity, common and standard technology along with rich data attachments with each transaction. Ripple’s distributed technology even in its nascency is far superior to today’s cross border payment infrastructure by miles as this drives down costs, increases processing speeds and delivers end-to-end visibility into payment fees, timing and delivery.

Ripple’s software creates an interconnected mesh which connects these individual siloed networks via an open and neutral protocol which is called the Interledger Protocol (ILP). This protocol brings in new efficiency to financial settlement as it enables settlement in real-time thus ensuring transaction certainty. This protocol also removes the settlement risk. Ripple’s software and protocol also provide the much needed data-rich messaging between all transacting parties thus delivering a real-time payment experience to the end-users.

Ripple’s software, xCurrent, allows banks to superiorly segregate themselves by providing new cross-border payments services and bringing down their total cost incurred on the settlement. The software, which is specifically developed and designed so that it can meet the necessary demands of banks and financial institutions by integrating itself without interfering with the existing architecture which includes the existing risk, compliance and information security frameworks. Ripple’s xCurrent product is directly installed and integrated within the financial institution’s software architecture and is fully compatible with banks systems by way of an API interface or through a translation layer which has the potential to consume traditional payment message formats and compress the whole integration time frame into weeks.

All the partner members on the RippleNet are connected through Ripple’s standardized technology, xCurrent which is the first of its kind global real-time gross settlement (RTGS) system. xCurrent also enables banks to send messages along with clearing and settling their transactions with improved speed, transparency, and efficiency across RippleNet’s global footprint of banks and payment providers.

xCurrent has 4 solution components which practically solves and covers the complete process of the banking transactions. They are – 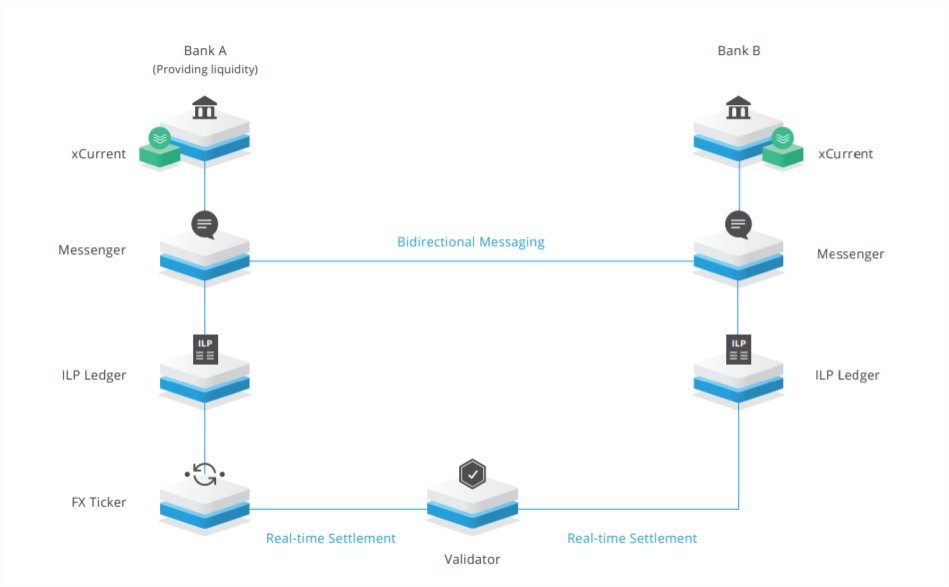 Ripple has strived and has got most prominent banks across the world on in its RippleNet Today RippleNet, overtime has become a really powerful and robust network which makes it easier to connect and transact between 200+ global banks and payment providers worldwide. Banks now have the option to easily leverage the most advanced blockchain and decentralized technology in the global payments industry today which provides on-demand liquidity in cross-border transactions and operational consistency through a common framework called the RippleNet. RippleNet is currently –

The following is the list of Ripple’s marquee partnerships with banks:

While xCurrent has played its part in bringing XRP to a level, it is believed the next ride upwards now will be in hands-on xRapid. xRapid is the second product on Ripple Labs which will actively use Ripple’s token XRP. This is a more common settlement service that any payment service provider or payment processing provider can use and reap benefits in settling the payment in the same country, region or overseas. The potential of xRapid can be seen by a recent announcement about the partnership between Fleetcor and Ripple. Fleetcor is a $19 billion payment services firm based in the US, made an announcement earlier this year that they would be piloting and testing with Ripple’s xRapid software. Fleetcor is a very large player in the payments industry which processes transactions worth billions of dollars annually and has a huge client base of businesses who make international payments to suppliers and employees across the globe. 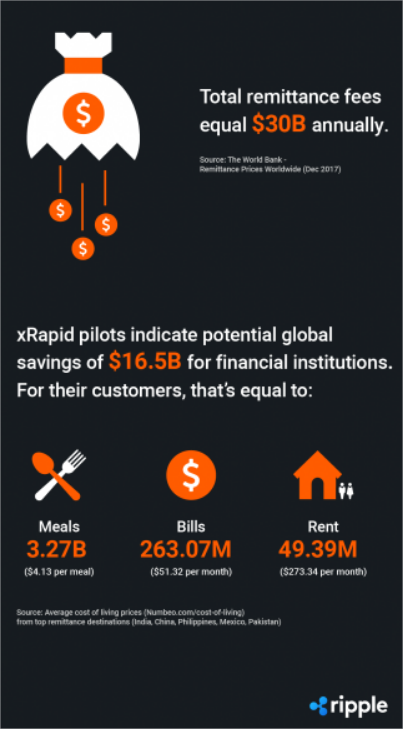 Pushers That Can Bring XRP Down

While there have been tonnes of positives, there have been critiques which states the XRP is not that great. There have been several reasons to it, the most common being the XRP and Ripple are centralized. Following are the reasons which are commonly heard why XRP is a bad investment –

1. There is a big lawsuit pending against Ripple

Ripple has been sued by R3 Holdco LLC over options contract and there has been a long hearing process which awaits the result. This former Ripple partner claims, that the company unilaterally terminated their contract (by email, which is very unprofessional) and now wants up to $1 bln from Ripple. Such a big amount of money might prompt Ripple to release even more XRP to markets, further diluting its price. And they can dump all they want.

2. Being in the hands of few, Ripple labs can manage XRP supply in markets

Ripple’s XRP is consolidated in the hands of few can dump any amount they want. There have been announcements that Ripple Labs will be releasing additional “50 billion XRP in a few years”, with “discretionary manner”. If one believes in decentralized cryptocurrencies and that’s the reason for investing in this coin, well, then that assumption is wrong or at least challenged several times because XRP is worse than fiat in this regard, as unlike Bitcoin, Ripple holds total power oversupply and can inflate market with their virtual coins as they see fit. Central banks have at least strict rules regarding money printing. XRP is corporate cryptocurrency – but one shouldn’t call it crypto then, but maybe “corporate fiat”.

Ripple’s XRP has enough firepower to rise to newer levels and if it does, all targets stated across the board will be just numbers. But yes one can’t deny the risk which can actually make XRP a ‘shitcoin’. One will have to wait and watch how Ripple mitigates its challenges and rises from its ashes like a phoenix.