One of the biggest and most controversial ICO, Tezos has finally released its betanet. The cryptocurrency went live on gate.io exchange and went through substantial ups and downs since it’s trading went live. Now, the big question is if Tezos will be able to survive the market sentiments or the ongoing sell-off is a prelude to its impending demise.

On June 31, Tezos finally launched its betanet after a year of anticipation, confusion and heck lot of drama. The Tezos Foundation confirmed the commencement of validation and the processing of transactions.

Finally, the Tezos investors got their tokens and the market went alive. Last week, a relatively smaller exchange Gate.io announced its support for XTZ. Before this, the tezos proxies were used for pricing data that are basically IOUs that are available on HitBTC for trading.

This first listing had the Tezos investors move into action. As the market data suggests they went with getting rid of their tokens. According to Coinmarketcap, Tezos price was at it highest at $4.55 on June 30 the day its beta was launched. Since then, the prices went on a constant downward spiral except for a couple of upward swings. 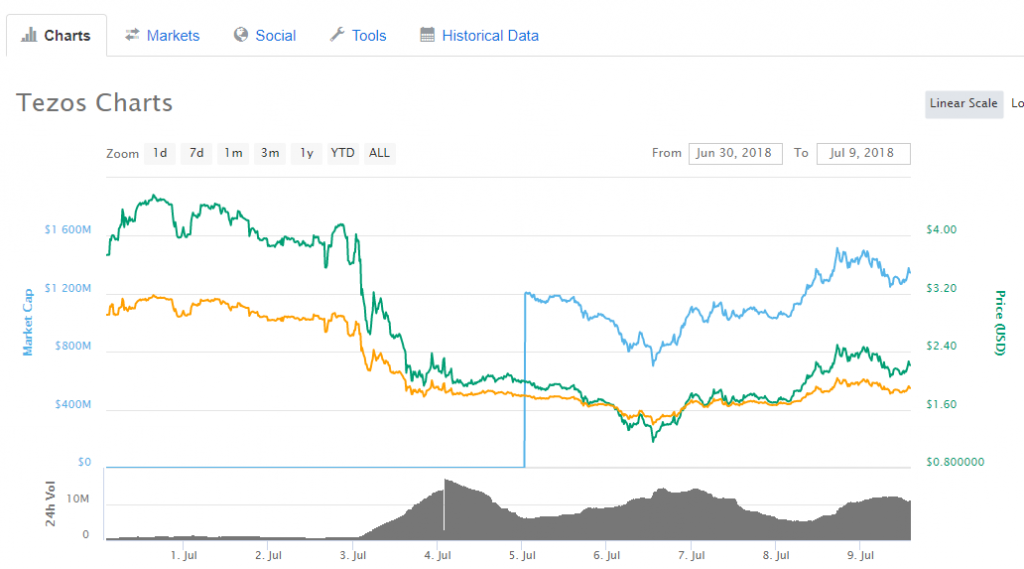 As the Tezos price chart shows, the price went to its lowest at $1.22 before the weekend. At the time of writing, Tezos has been down by 3.04 percent in the past 24 hours at $2.18 while running in the red in BTC market as well. At 19th position, the market cap of this cryptocurrency is $1.31 billion.

With $232 million raised in its ICO in June 2017, Tezos was not only one of the most hyped but a controversial one as well. Last year, the founders of this protocol Arthur and Kathleen Breitman got into a dispute with Johann Grevers, the president of the Tezos foundation board that has the control over its raised funds.

This led to a delay in the release of tokens to the investors for which the platform received serious criticism as Tezos token buyers were left empty-handed. At that time, the price of instruments in Tezos tokens’ future market that allows speculation fell down over 25%.

Moreover, in April, Arthur Breitman was banned from broker activity till 2020 and fined $20k by the US regulators. Reportedly, while working for Morgan Stanley, he failed to disclose the outside business activities in terms of Tezos to the FINRA.

Now, Tezos has finally come into action and while some are trying to cash out their investments, others are getting hopeful, seeing it as a prelude to a great new start. It is also worth noting that at the time of its ICO launch, the price of one XTZ was $0.47. So, despite a loss in its value, XTZ is actually 300% up since its inception.

Currently, it is available on a very limited market i.e. HitBTC and Gate.io. So, once it widens its market and the investors that have been getting out of this project settles down, it is a possibility, Tezos will make its way into investors’ portfolio.

Balenciaga Announces To Accept Crypto Payments.
Facebook Twitter LinkedIn Xing
Sagar Saxena
119 Articles
Passionate about Blockchain and has been researching and writing about the Blockchain technology for over a year now. Also holds expertise in digital marketing. follow me on twitter at @sagar2803 or reach out to him at sagar[at]coingape.com

Binance Sees Crypto Potential In India, But There’s A Catch