The second largest cryptocurrency exchange by Coinmarketcap, Huobi has listed IOTA today. Currently, at 9th spot, a solid surge has seen in IOTA price which has been jump-started by IOTA foundation’s announcement of ecosystem platform and joining the big players in the automotive industry.

IOTA (MIOTA) has been experiencing quite a strong bullish momentum in the cryptocurrency market with its prices up by 12 percent. Currently sitting at $2.33, IOTA ranks at 9th spot with a market cap of over $6.4 billion.

For the past few days, IOTA has been experiencing a good surge in its prices which has a number of factors driving them.

To start with, Huobi exchange, which according to Coinmarketcap is the second largest cryptocurrency exchange on the basis of 24-hour trading volume has announced that it will be listing IOTA on its platform. With over 200 cryptos listed on the exchange, China-based Huobi has over $1.8 billion trading volume. 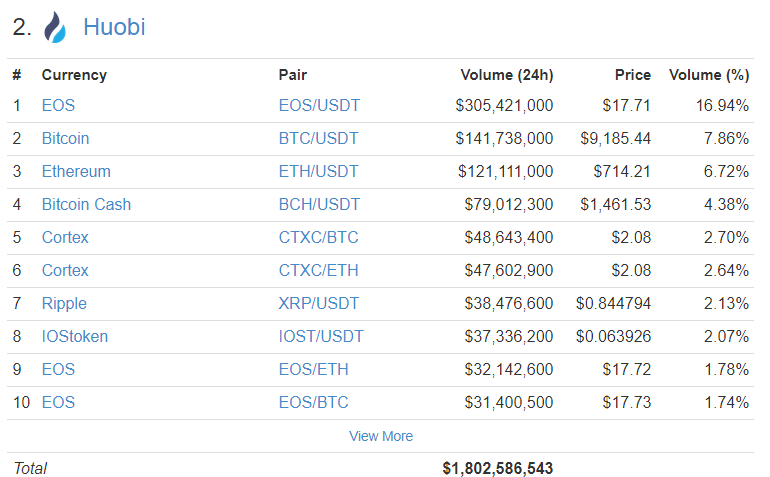 Huobi Pro made the official announcement that mentions the launch of IOTA May 3. However, the deposits and withdrawals will be made available on May 3 and May 6 respectively.

The exchange will be introducing the IOTA/BTC, IOTA/ETH and IOTA/USDT trading pairs that will be available on May 4.

IOTA has another news coming up in terms of Cobinhood listing on May 4 for the BTC, ETH and USDT trading pairs.

Just yesterday, IOTA Foundation (IOTA) announced that it is joining the Mobility Open Blockchain Initiative (MOBl) consortium with big names from the automotive industry like BMW, General Motors, Bosch, ZF, Groupe Renault among others to create a new and advanced mobility industry that fosters the development of Distributed Ledger Technology (DLT) and open software tools.

IOTA continues to be bullish

IOTA is available on some biggest cryptocurrency exchanges from which Binance and Bitfinex hold the largest share of trading. With Huobi listing, its liquidity will further increase. Supported by a devoted community, it went through a series of developments that have been driving its IOTA price.

Recently, IOTA Foundation announced the launch of IOTA ecosystem platform that aims to unite the community and promote its project’s development.

“With a global community of developers, entrepreneurs, corporate executives, government officials, philanthropists, hobbyists, and general enthusiasts contributing to the IOTA project, the IOTA Ecosystem is a platform for this community to meet, collaborate, learn, inspire, develop and build.”

Moreover, IOTA was also joined by ElaadNL to release the first charging station that allows paying and charging with IOTA.

IOTA has certainly awakened as evident from the gains it gathered in the last few days. The cryptocurrency which was on 13th spot recently on Coinmarketcap has gradually risen to 9th spot which can be soon expected to reach $3 price level.

Do you think IOTA price will moon further in the wake of its upcoming Cobinhood listing? Share your thoughts with us!