According to cryptocurrency analyst and Adaptive Fund partner, Willy Woo, Litecoin is expected to offer a confirmation signal to BTC’s upcoming bullish momentum. Currently trading at $46.00 against the dollar, LTC/USD short timeframe charts candle breached above key resistance at $45.50 USD signaling a possible bullish momentum in coming days. LTC has recorded higher highs and higher lows in the past few trading sessions however BTC is only recording higher highs, and a higher low will effectively call in bulls to the market.

Bitcoin is currently consolidating in the $7885 USD support level holding with a bullish trajectory in sight. With Litecoin currently showing very bullish signs with the relative strength index heading towards the overbought level, which Willy Woo believes gives signals of a reversal in BTC’s market. He wrote,

“Using on-chain investor activity, which gives a read of where this may go; LTC is already very bullish, while BTC is still consolidating around an early bullish swing.”

In a nutshell, I'm expecting a bullish run in BTC lead by LTC as a confirmation signal.

Bitcoin on the verge of a breakout as $8,000 lingers

On the 30 minutes charts, BTC/USD bulls are closing in on the bearish wedge resistance level. Bitcoin currently changes hands at $7,911 USD, a slight drop from intraday highs of $7,927 USD, signaling a possible spike past $8,000 in the coming hours. A breach above resistance is on the verge as Litecoin market dynamics shows. 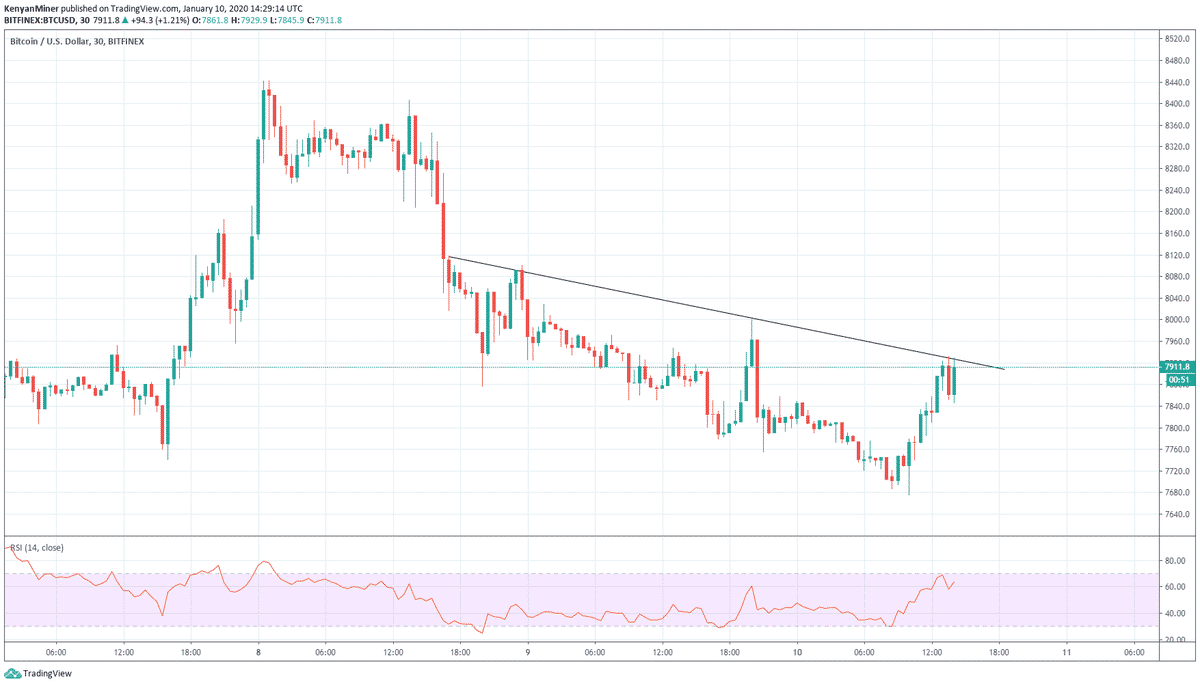 The relative strength index (RSI) on the lower timeframes bounced off the resistance formed at 70 overbought levels as bulls eased off in preparedness for an oncoming bullish run that may push the top crypto towards the $8,400 USD levels.

Look out for Litecoin’s breakout which is set to highlight the start of a Bitcoin bullish momentum as Woo said.