IOTA’s community would be on sky high at this moment as the first smart contract on the project’s quorum consensus framework, Qubic lite and qApp on Qubic Lite, TOQEN has gone live. The smart contract, even though built on IOTA’s core protocol cannot use IOTA directly hence they need to be placed on the TOQEN protocol.

Qubic, being a protocol that specifies IOTA’s solution for smart contracts, is designed by the foundation to enable smart contracts but the foundation has not yet specified how this will be done technically. All that is known for now is the implementation concept for decentralized computing. These smart contracts are unable to use IOTA token directly because it would require changes to the IOTA core protocol that allows to lock-up iotas. So, having a first smart contract working on the Tangle is not trivial at all and that’s the reason Microhash has been built on three additional layers on top of IOTA to make this happen.

IOTA’s smart contract structure based on Qubic and TOQEN

The layer structure of IOTA smart contract somewhat looks like this

These layers are part of IOTA’s roadmap as natively IOTA was not built to support smart contract. The IOTA Foundation has publicly stated, that smart contracts will not be a feature of the IOTA core but provided as a layer on top. And it’s also public knowledge, that IOTA Foundation was actively working on this additional smart contracts layers which seems to have been implemented finally. So what are Qubic and TOQEN?

Specifically, Qubic is a protocol that specifies IOTA’s solution for quorum-based computations, including such constructs as oracle machines, outsourced computations, and smart contracts. Qubic provides general-purpose, cloud- or fog-based, permissionless, multiprocessing capabilities on the Tangle. In the long term, Qubic will allow people to leverage world-wide unused computing capacity for a myriad of computational needs, all while helping to secure the IOTA Tangle: an IOTA-based world supercomputer. 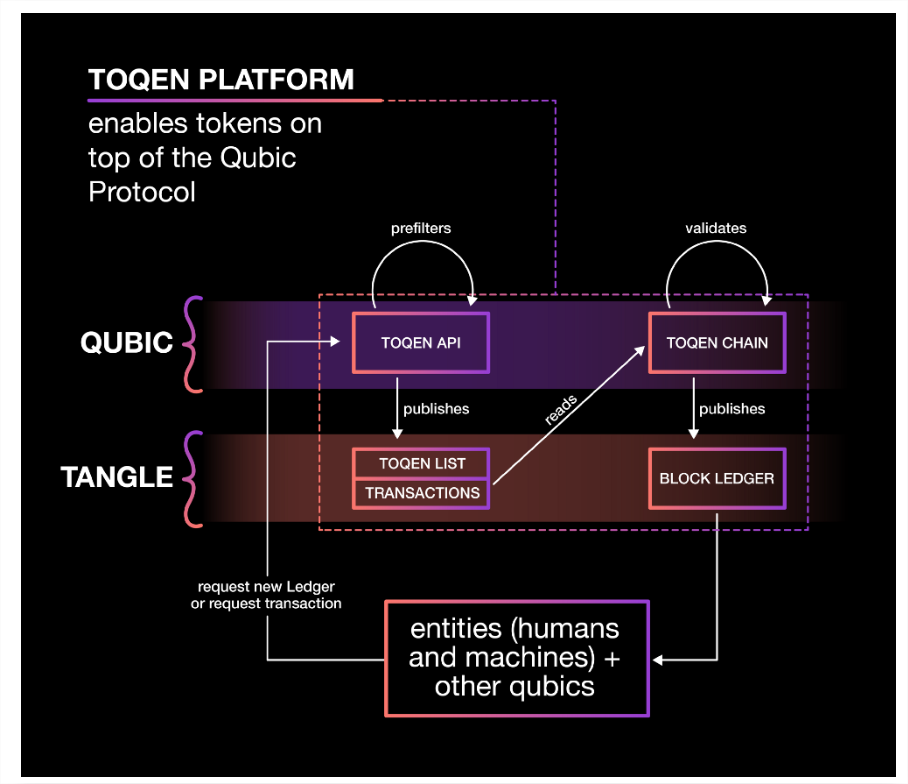 Whereas TOQEN is a third layer Cryptocurrency that is bringing Smart Contracts to IOTA. Since the native IOTA token does not support smart contracts, it was necessary to build a separate token on top of the Tangle for this purpose. This is the reason why TOQEN was created. It’s basically a blockchain with its own token (TQN). According to IOTA’s press release

“Once value transactions were live in the TOQEN network, enabling smart contracts was actually super easy. Nothing more was required than to simply allow qubics to hold TQN. Since qubics are decentralized consensus-based entities, their TQN holdings themselves are subject to consensus. This is basically the definition of a smart contract.”

So with the launch of Microhash, we can expect more smart contracts to come live on IOTA’s blockchain and its respective layers. This also means that another blockchain goes live with smart contract built over it and the competition for Ethreum increases. This is an alarm for Ethereum to wake up and start solving its scalability issue or soon it will be a story of the past.

Can IOTA’s smart contract become big enough to challenge that of Ethereum’s? Do let us know your views on the same.