According to a recent document released, Civil Rehabilitation Trustee for Mt Gox., Nobuaki Kobayashi, who is often termed as “Tokyo Whale” in the crypto circles, has disposed off another 25.98 billion yen ($230 million) of Bitcoin and Bitcoin Cash. The following step was taken by the bankruptcy trustee, according to the release, was a measure to secure interests of creditors.

According to the statement released on Mt Gox’s website, Nobuaki Kobayashi, who is the exchange operators’ trustee, has sold Bitcoin (BTC) and Bitcoin Cash (BCH) worth more than $230 million (26 billion JPY). The sale was carried out between the period of the last creditor’s meeting on March 7 and the June 22 court ruling that allowed the Mt Gox. estate to exit bankruptcy and enter civil rehabilitation.

As a result of the sale, the balance in the bankrupt trustee’s account was approximately JPY 70,059 million immediately prior to the establishment of the trust in accordance with the Trust Agreement described below.

According to the trustee, this decision of selling cryptocurrencies was taken as it was necessary and appropriate to procure a suitable amount to secure the interests of creditors who filed proofs of bankruptcy claims in the bankruptcy. According to the statement, the points mentioned in “Grounds for Implementing Sale” was

“As a result of consultation with the court and the examiner, the bankruptcy trustee (i) determined that it was necessary and appropriate to procure a suitable amount of money to secure the interests that the creditors for the principal amount and delay damages of the determined and undetermined bankruptcy claims that have been filed in the Bankruptcy Proceedings (approximately JPY 73,373 million in total, including BTC claims (i.e., claims such as those for the return of cryptocurrency split from BTC; hereinafter the same) and monetary claims) which were expected to have already obtained in the Bankruptcy Proceedings, and (ii) implemented the Sale”

Creation of trust to further the secure interest of monetary creditors

Taking further measures to secure interests for monetary creditors, the bankruptcy trustee, Kobayashi, created the structure of a trust entering into a trust agreement and guarantee entrustment agreement with Sumitomo Mitsui Banking Corporation (SMBC). As per the release, from the amount of approximately JPY 70,059 million held in Kobayashi’s account, the bankruptcy trustee established a trust of JPY 15,894,530,915. The purpose of the trust that was stated in the document was

“The settlor entrusts money to the trustee, and the trustee provides, among others, guarantees for the obligations regarding the monetary claims for which proofs of bankruptcy claims were filed, which are only paid out of the Trust Assets for the sake of the beneficiaries. The monetary claims subject to such guarantee are limited to those accepted under the Civil Rehabilitation Proceedings and others; hereinafter, the same” 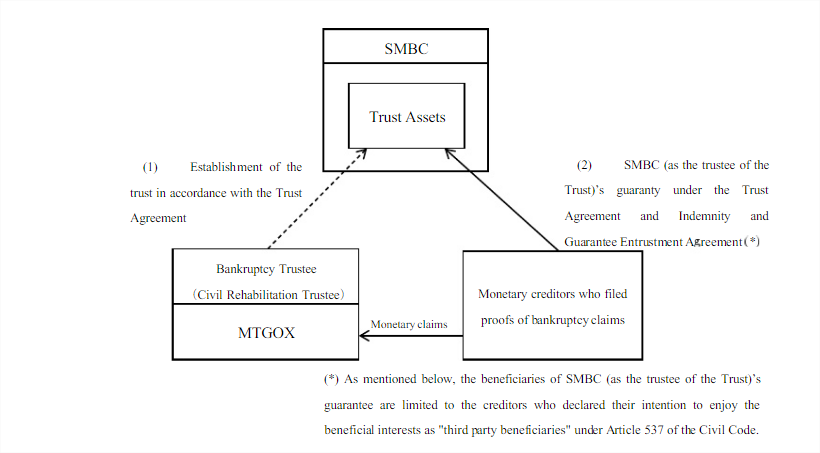 With the date of submitting claims only a month away, which is by Oct 22nd, the money, the guarantees and the structure for repayment seem to be in place. As the estate having already entered civil rehabilitation, most creditors are hopeful for receiving their monies after a long wait of almost 4 years.