NEO has announced its first step towards decentralization that is going to hit the market in a few hours. The NEO community is ripe with excitement and anticipation as its prices surge well over 12 percent becoming the highest gainer in the top 20 coins.

NEO has announced its first step towards decentralization while signifying it as the new era of NEO ecosystem that will be unveiled tomorrow. Notwithstanding the fact that the team didn’t reveal any other detail as to what it is going to be, NEO community is elated and extremely bullish.

The mysterious but highly anticipatory announcement does mention the date of the “big reveal” which is July 4, 21:00 (GMT+8).

Everyone has been left guessing what step is this as one user commented on Twitter, “English translation seems to be beneath. So it stays a mystery until tomorrow either way.” Another NEO enthusiast Hong songkong asks, “what it mean?”

Some did venture a guess and came up with “Nodes”. While a Redditor MOzil85 stated, “Decentralization and neo becoming divisible. That’s progress. And we ain’t done yet.” The community might not be able to figure out the big reveal but everyone is bullish on NEO and waiting for its prices to skyrocket.

So until tomorrow, it remains a mystery but what isn’t is the surge in NEO prices.

The world’s 12th largest cryptocurrency has taken a good surge while managing the daily trading volume of $164 million. With a market cap of $2.4 billion, Neo is the highest gainer in the top 20 coins at this moment.

This month has brought a good start for the NEO cryptocurrency as from July 1, it started rising upwards as shown in the chart below. 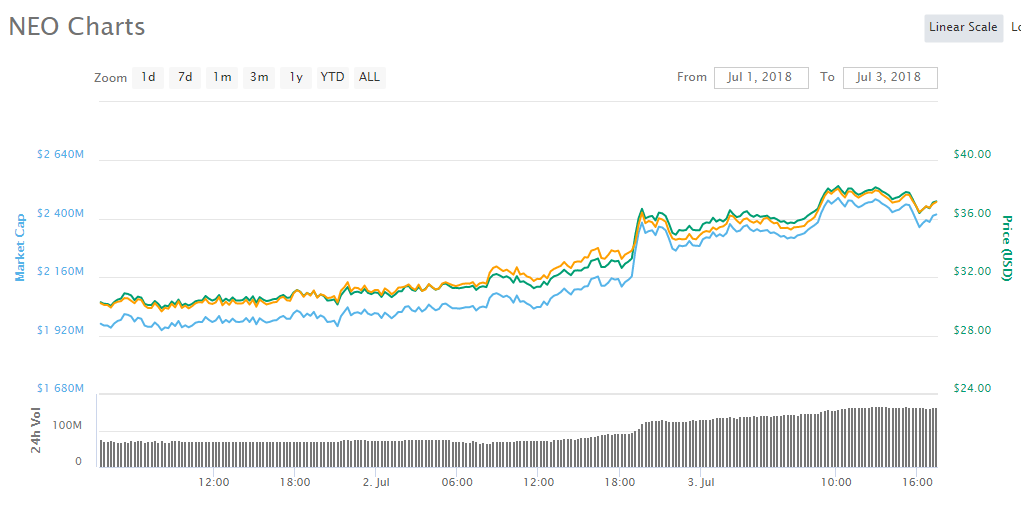 NEO which has been generally called the “Ethereum of China” has been one of the best performing coins that offer the platform to build the Dapps. Another highlight of NEO is the “City of Zion” which is an open source and independent community of developers designers and translators that work dedicatedly toward the betterment of NEO. It has already many developments such as NEO wallet and portal credited to their part and still working on more.

Now, as NEO set to release a huge step into decentralization, it will further make its way to dominate the crypto market and surge over 100% in near future.

Are you excited about the mystery announcement NEO has scheduled for tomorrow? Do you think this will see NEO price hit $50? Share your thoughts with us!

advertisement
✓ Share:
Disclaimer
The presented content may include the personal opinion of the author and is subject to market condition. Do your market research before investing in cryptocurrencies. The author or the publication does not hold any responsibility for your personal financial loss.
About Author
Partyush Goyal
A computer science engineer, I have been adamantly following the blockchain and cryptocurrency industry for the past 2 years. A crypto enthusiast and hardcore blockchain follower. Reach out to him at [email protected]

Facebook Instagram Twitter LinkedIn
Partyush Goyal
45 Articles
A computer science engineer, I have been adamantly following the blockchain and cryptocurrency industry for the past 2 years. A crypto enthusiast and hardcore blockchain follower. Reach out to him at [email protected]
advertisement