American multinational corporation, Nike is reportedly hitting the crypto market. The firm has applied for a new trademark ‘CRYPTOKICKS’ with the United States Patent and Trademark Office(USPTO).

The firm’s application is currently available on USPTO’s website which was initially filed on April 19, this year. The trademark application mentions various crypto-related terms including blockchain technology, digital currency, Cryptocurrency trading service, virtual currency, blockchain-based assets and more. However, the type of service Nike intends to build under Cryptokicks is not certain yet. Trademark application reads it as follows; 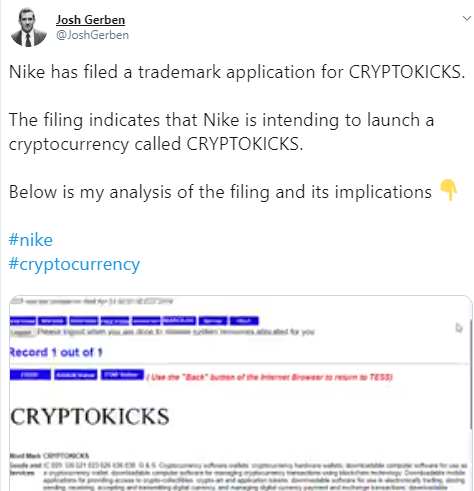 Gerben further in a statement to media’s query says that;

“There has to be somewhat of a business idea behind it. If you submit things just for the purpose of submitting things, it will tie up the trademark system unnecessarily. Nike does not have a history of filings that are speculative.”

When Coingape reached Josh Gerben to state his thoughts on what Nike can probably have with this ‘Cryptokicks’ in the near future, Gerben says via Twitter that;

It seems like Nike is planning to build out a software platform (such as an app). My guess is it starts as some sort of rewards program where the “coins” can be used for the purchase of Nike products.

As per the law, if the Trademark is approved ‘Nike can have ownership of ‘Cryptokicks’ name for four years – within the time, Nike will have to launch a commercial product with term ‘Cryptokicks’ to get the trademark successfully. In the meantime, competitors like Adidas also have 30 days time period if wish to oppose the trademark application.

Moreover, the ‘cryptokicks’ has already existed on the web as a shopping website for crypto-printed clothing. Gerben explained Coingape query on Trademark infringement via Twitter;

Delta Airlines and Delta faucets – both can use ‘DELTA’ because one is a faucet maker, the other is an airline. So long as consumers are not likely to be confused, there is no trademark infringement.

However, the crytokicks domain looks like the UK based as its domain involves the extension’.co.uk’ – this will have no effect on Nike’s involvement with Cryptokicks as Nike has applied for US patent. According to Gerben;

To start, if it is a UK website and has no US presence, there would be no US trademark rights associated with owning that domain, Said Gerben. The application filed by Nike was for the US (perhaps others to come elsewhere).

What do you think the secret behind CRYPTOKICKS trademark application by Nike.? Let us know in the comment below.